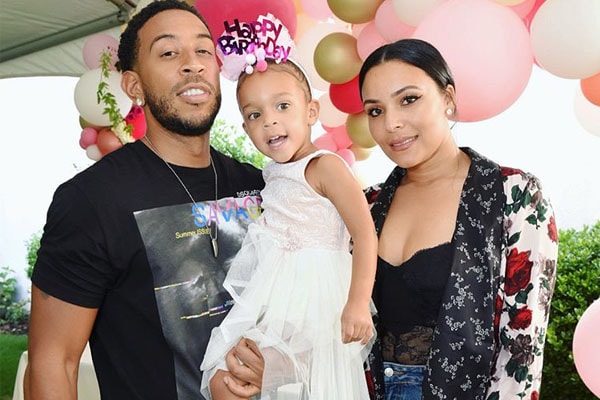 Ludacris with his daughter and wife

The American rapper Ludacris married his longtime girlfriend Eudoxie Mbouguiengue, on the December of 2014. The couple now is blessed with a lovely daughter named Cadence Gaelle Bridges.

Before tying the knot with one another, Ludacris had been dating his wife Eudoxie since 2009. After being together for almost four years, they finally took their relationship to the next level. Previously Ludacris was in some kind of fling with his longtime friend Tamika Fuller and has a baby together named Cai Bella Bridges.

Ludacris’ Proposal To This Wife

The best way to describe the “Get Back” rapper Ludacris’ proposal is ‘Like some scene out of a romantic movie,’ because that is exactly what happened. As they were flying on their private jet, Ludacris had spelled out “Eudoxie Will You Marry Me” with a love sign on a field. Luda posted a photo on his Instagram of the moment of his proposal. We can see how Ludacris’ wife Eudoxie was happy and surprised at the same time.

After the Gabon national Eudoxie accepted the proposal, Ludacris and  Eudoxie got married the very same day. The 41-year-old rapper Luda had posted a photo of their marriage with a caption that read “Why wait? Did the thing before 2015.”

Everyone was happy for the rapper except his baby mama Tamika Fuller. She stated that Ludacris hurriedly married Eudoxie to win their ongoing child custody battle over their daughter Cai. Plus Ludacris’ baby mama further added that Luda was trying to avoid $7000 in child support.

On the 4th of July, 2015 Ludacris’ wife Eudoxie gave birth to their first child together, a baby daughter named Cadence Gaelle Bridges. People had to wait around for a year to catch a glimpse of the cute Gaelle. The lovely little Cadence has inherited the good genes of both of her parents.

Just a couple of weeks ago, Cadence celebrated her third birthday. Luda and Eudoxie hosted a tea party for their daughter as her birthday celebration. Toya Carter and her daughter Reign Ryan Rushing were some of the few guests on the list.

For the time Ludacris is enjoying his married life to the fullest.