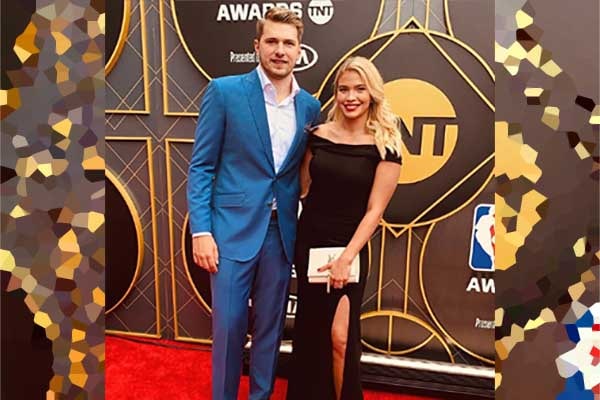 Any NBA fanatics might have heard about the pro basketball player Luka Doncic. He gained recognition from his first season by getting the NBA Rookie of the Year honor. In addition, he has led the Dallas Mavericks to win many matches.

Though his fans always keep up to date with Doncic’s career, they are also interested in his love life. So, searches related to Luka Doncic’s girlfriend, Anamaria Goltes, are nothing new. Well, she is a successful woman who is also a fashion and lifestyle content creator.

Luka’s partner, Anamaria, has been under the media radar since the start of their relationship. Many might be curious about how did it begin for the couple. So, let’s find out the pair’s initial interactions, dating, and more in this article.

Luka Doncic’s Girlfriend Anamaria Is A Model And Dancer

Luka Doncic’s girlfriend, Anamaria, is a Slovenian native who grew up there with her family. She attended school close to her home before enrolling at the University of Ljubljana.

The beautiful lady must have developed an interest in fashion and dancing at a young age. She was initially scouted by IMG’s Instagram-based We Love Your Genes campaign and moved to the US.

Goltes was a model for Slovenian company Lisca as per Heavy. She has modeled for the brand’s several lingerie campaigns. In addition, she was a brand ambassador for Lisca’s Cheek line.

Luka Doncic’s partner, Anamaria, has used her modeling experiences to create fashion content. She has an official website and blog to share fashion tips and advice.

The model recommends night care products, provides fashion hacks and talks about new releases on her blog. She also advises on home decor products and ornaments.

Luka And His Partner Anamaria Are Childhood Friends

Luka’s first encounter with his lady love, Anamaria, goes back to their childhood days. Both first met when the now pair was twelve years old on the seaside in Croatia.

The couple became close quickly as they shared the same friends’ circle. Later, Luka went on to play for Real Madrid at thirteen. After that, he competed with the club for five years.

Similarly, Luka Doncic’s girlfriend, Anamaria, might have focused on her education. Yet, despite drifting from one another, the lovebirds maintained their friendship.

The Pair’s Next Encounter And Beginning Of A Relationship

As mentioned earlier, Luka’s partner, Anamaria, left for the US after being scouted by IMG. So, she might have met him in America after settling down there.

The lovebirds eventually started dating in 2016. However, both had a brief breakup in 2018 before Doncic’s NBA draft. In addition, the pair had unfriended each other on Instagram as per several sources.

Thankfully, the duo was back together after a few months. Since then, the lovebirds have been enjoying a comfortable life together.

Anamaria Is Supportive Of Her Boyfriend Luka’s Career

It is said that a woman is behind every man’s success. It must also be the same case for Doncic, whose partner, Goltes, always cheers for his success.

Luka Doncic’s girlfriend, Anamaria Goltes, occasionally shares his basketball accomplishments on her Instagram account. She also never misses out on his matches.

The pair also spent the quarantine from the COVID-19 pandemic together. Both couldn’t travel and cozy up at their home in Dallas. Furthermore, Luka’s lady love, Anamaria, often shared snaps of their time together on social media.

Surfing through the lovebirds’ Insta accounts, they often share pictures of them hanging out, travels, vacations, etc. Both don’t shy away from revealing their relationship in public. In addition, the duo often attends public functions and events together.

Luka and the love of his life, Anamaria, are the parents of two dogs, Hugo and Gia. The pets also have an Instagram account with 34.1K followers.

The Mavericks player hasn’t shared any plans of marriage as of now. Instead, he might be content by spending quality time with his long-time partner, Anamaria. Hopefully, we might get to hear the wedding bells soon in the future.