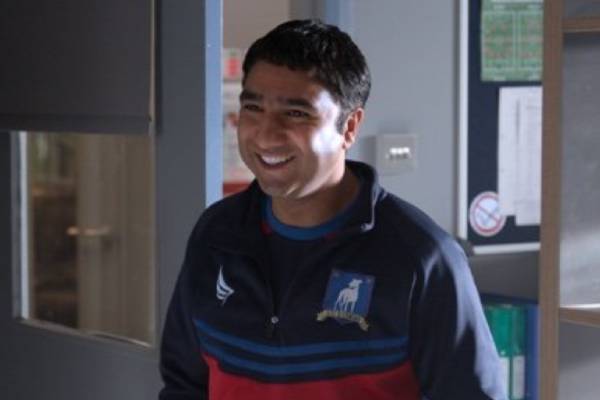 Nicholas George Mohammed or Nick Mohammed is a familiar name to Ted Lasso, and 8 Out of 10 Cats Does Countdown fans. Well, he is the one who portrayed the characters like Nathan Shelley and Mr. Swallow. The West Yorkshire native has been in the film industry since 2006. During his career spanning sixteen years, he has amassed enormous fame and fortune.

Behind the camera, the actor, writer, and comedian is a family guy. He shares a blissful marital life with Becka. Many might be curious to know about his personal life. Thus, in today’s article, let’s get to know Nick Mohammed’s wife, including her profession and family background.

The Ted Lasso star tied the knot with Becka in late 2014. Ever since, the Mohammed pair have been happily together. But the couple is very private and maintains utmost privacy regarding their relationship timeline. The actor shared the news of his marriage on Twitter by sharing a funny drawing of his niece’s impression of the events.

Got married last weekend, this is my niece’s impression of the events. WHAT IS GOING ON NEAR MY WIFE’S CROTCH?! X pic.twitter.com/2hv4J0PKrQ

Nonetheless, the love birds are head over heels for each other. In addition, Nick and his partner seem to prioritize their family and spend a lot of quality time together. For example, when Nick went to America for his first-ever Emmy nomination in September 2021, he returned home just after the show to prepare for the birthday of his youngest kid. The skilled actor must have wanted to make sure he was there on the special day of his precious baby.

Also Read: Get To Know Leslie Bryans – A Martinez’s Wife

Nick Mohammed’s Wife Is A Mother Of Two Kids

As mentioned above, Becka and her husband have been happily married for about a decade. Apart from that, the lovebirds are blessed with two adorable sons, Finn Mohammed and Arthur Mohammed, born in 2016 and 2018, respectively. Becka and Nick Mohammed’s children are still young. That must be why they have decided to keep them away from the media limelight.

The pair must be avoiding unnecessary attention from the media. Even so, there is no doubt that the Mohammed siblings are growing up with all the love and care of their parents. Becka’s husband once said that becoming a parent doesn’t make anyone a better person. But, after welcoming his kids, he became better at dividing his energy.

Is A Humorous Teacher

Nick Mohammed’s wife, Becka Mohammed is a teacher. The actor was grateful for his partner’s expertise during the pandemic as their sons had to stop going to nursery. It seems the married duo supports one another’s careers. Besides, it appears as both the teacher and actor are comedic at heart which might be one of the reasons for their content and successful marriage.

We are all well versed in Nick’s comedic skills. However, you might not know his spouse is funnier. Talking with The Guardian, her husband said she is the funniest person he knows. The actor said every day, Becka says something that makes him roar with laughter. Plus, The Martian star secretly writes down her jokes.

Altogether, Nick Mohammed’s wife is a person of secrecy. Despite all the fame, she has successfully kept her personal and professional life under the wrap. Let’s hope she will come at ease and share more about herself. We wish her Becka and her family love, happiness, and success in the coming days.