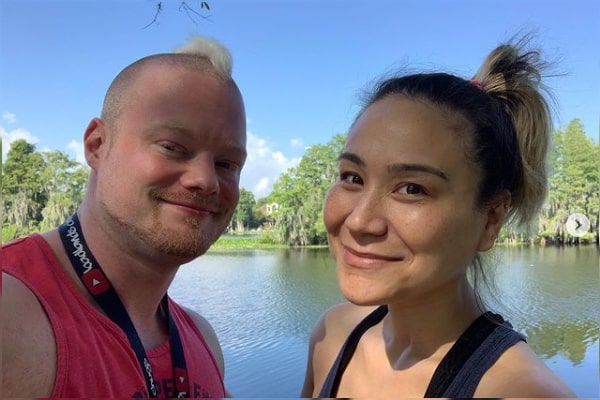 Apart from making headlines after making records, Sudo has sparked her fans’ interests in her romantic relationship with the 6th ranked competitive eater with Major League Eating, Nick Wehry. Thus, here, we will be sharing their relationship timeline and where they are now in their romantic spectrum. Therefore, have fun!

As mentioned earlier, Miki Sudo has made a reputation as the most robust competitive eater. She not just gulps goods but digests other food items as fast as one can possible. For a fast eater like Sudo, true love, however, came slowly.

Sudo and Nick Wehry reportedly started their relationship in 2019. Currently famous as ‘The Hungry Couple,’ the Sudo-Wehry pair never made headlines before 2019. Moreover, both Nick and Miki started posting on their respective social media handles the same year.

The undefeated pair gushes about their relationship on their Instagram, with subtle and compelling captions. Apart from their individual Instagram, they also created a joint account called “The Hungry Couple” in January 2020. The page has already garnered 400+ followers within a year and continues to grow at its pace.

Aforementioned, Miki Sudo’s boyfriend is also a competitive eater and has earned several titles throughout the years. But imagine the food date of the couple, the two most iconic competitive eaters in the industry! EPIC, isn’t it?

Likewise, they also ate a combined 41.375 pounds of the French delicacy in just 10 minutes in the 2019 World Poutine Eating Championship.

As of now, the pair seems to have slightly moved their relationship spectrum upward and decided to get engaged.

They Are Engaged & Pregnant

Yes, you read that right! Nick Wehry is not just Miki Sudo’s boyfriend but got promoted to fiancé.

Miki announced the proposal via her Instagram caption, “I couldn’t say ‘yes’ fast enough.” Her fiance proposed to her at the Draft Kings Eating Contest on April 25, 2021, after winning his section to become Hardboiled Egg Eating Champion of the World.

Miki also credited her partner, Nick, for changing her life in all the best ways. She further added that she’d have signed up for an eating contest sooner if it meant meeting him. If you think surprises end here, we shall become Santa because Miki and Nick had another surprise for her fans.

Just days before announcing the engagement, Miki took a moment to announce her pregnancy in 2020. She further updates her fans about her pregnancy week, and her last update in March said, “22 weeks and already impatient.” The proud mom-to-be is more than ready to welcome her newborn.

Since Miki is the new mom-to-be, she is taking a break from competitive earing for the duration of the pregnancy. She further assured her fans that she’d be back as soon as it’s physically possible after the baby’s birth.

Miki Sudo’s Boyfriend Is Already A Father Of Two

Although this is Miki Sudo’s first pregnancy, her fiance already embraced fatherhood with his ex-wife, Sarah Wehry. The former couple welcomed two kids, a daughter, Sylvie Wehry, and a son, William Wehry.

Both Wehry’s kids are a constant face on his Instagram, and they are pretty close to his girlfriend as well. During a mother’s day post, Miki’s partner also applauded her for being an excellent mother to his kids.

Miki and Nick live together in Torrington, Connecticut, happy with their kids and eagerly waiting for their newborn. Thus, let’s hope to hear more of the pair in the coming days. Also, their fans are looking forward to their grand day. So, what do you think, will Nick and Miki tie knots before or after the arrival of their little boy?