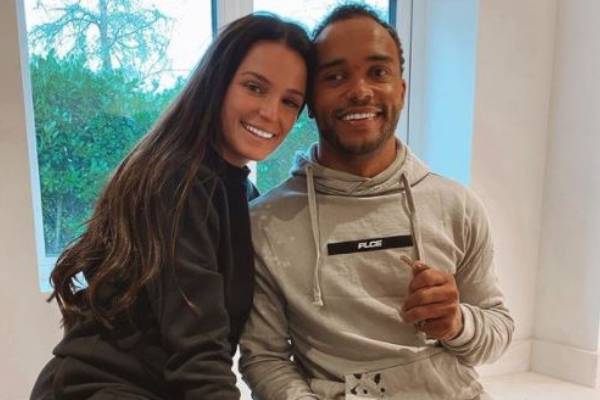 Lewis Hamilton is one of the most renowned names in Formula One world. The British racing driver, who currently competes for Mercedes in Formula One, has won seven World Drivers’ Championship titles. Besides F1, Lewis has also gained a reputation as a ladies’ man off-track. Be it, world-renowned singers, like Nicole Scherzinger and Rita Ora or beautiful models like Winnie Harlow, Lewis has been seen with multiple women over the years.

Because of his fame, his family members and close ones have also been in the media attention. Nicolas Hamilton, the paternal half-brother of Lewis, is a racing driver like him and currently competes in the British Touring Car Championship. He has remained in the limelight for a long time, and as a result, fans are curious to know about his personal life. Going through his Instagram, we can see that he has often gushed about his lover.

Thus, in this article, we will be learning in detail about Nicolas Hamilton’s girlfriend, Sophie Hamshere.

The Pair Knew Each Other Since 2012

Nicolas Hamilton is currently dating a beautiful woman named Sophie Hamshere. The couple is very open about their relationship, and they often post about each other on their social media pages.

According to one of Sophie’s posts, the duo must have known each other since 2012. Nicolas Hamilton’s girlfriend shared a picture and stated that it was their first-ever photo together that they clicked in 2012.

The pair remained friends for many years. According to Sophie Hamshere’s boyfriend, Nicolas, they began dating in December 2017. Since then, the lovely couple has been together, and they often gush about each other on their social media.

Furthermore, in December 2021, the girlfriend and boyfriend bought a house and named it The Ham House. In addition, they have also made an Instagram page, where they share their journey in the house.

Nicolas Hamilton’s partner, Sophie Hamshere, is involved in fitness. She owns a home gym, Sophitt, in Hertfordshire and is a personal trainer there. Furthermore, she also provides Instagram live workouts on a private Instagram page, Get Sophitt.

Anyone willing to take classes from Sophie needs to pay $13.43 (£10) per month. Similarly, for the six-month and one-year membership, one has to pay $77.86 (£58.00) and $154.37 (£115.00), respectively. Then the squad members will have access to 10 workouts every week. Moreover, every training takes place live on the private Instagram page. Those, who have paid the amount, will become the squad members, and only they can get access to the post.

The workouts that Sophie teaches are posted to the IGTV and are uploaded permanently for members to access whenever suits their schedule. Furthermore, she also uploads several workout videos on her personal Instagram page. Sophie must be earning significantly as a personal trainer as she seems to be engaged in the profession for quite a long time.

Supportive Of Her Boyfriend’s Career

It has already been four years since Nicolas and Sophie got together. Since then, the couple has never missed a chance to show their love for each other on their respective social media pages. Furthermore, Nicolas Hamilton’s girlfriend often shares pictures of his achievements and states that she is very proud of him.

Many might not know, but Sophie Hamshere’s boyfriend, Nicolas, was diagnosed with cerebral palsy after he was born prematurely. During his teen days, he needed a wheelchair, but now, he no longer needs it to get around. Furthermore, he has also been involved in racing. In April 2019, he began his first full-season as a competitor in the British Touring Cars Championships. In addition, he drives a specially-modified car due to his condition.

Sophie attends almost every race of her partner and supports him in his career. Nicolas too supports her work and it is evident that the couple loves each other immensely. While they are yet to get married, we do hope to hear some wedding bells in the future.

Nevertheless, let’s hope Nicolas and his lover’s relationship stays the same, and they grow stronger every day. Plus, we hope to see Nicolas Hamilton’s girlfriend finding more success as a trainer in the coming days.