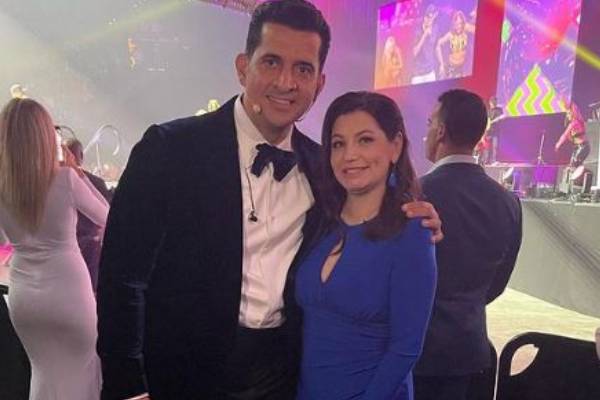 Patrick Bet-David is a doting father of four kids and a loving husband. The famous author, speaker, and entrepreneur is living a happy life with his wife and kids. He has gained significant fame because of his work, and his personal life has always been a topic of interest for several people.

So, who is the entrepreneur married to? Let’s find out details about Patrick Bet-David’s wife, Jennifer Bet-David, their marital life, and their children.

Patrik Bet-David shares a blissful marital life with Jennifer Bet-David. The duo met for the first time in June 2002 as colleagues working for an insurance agency in Encino. They were friends and co-workers for five-and-a-half years before going on their first date on December 29, 2007.

They dated for a year and a half and decided to take a step further in their relationship. On March 29, 2009, Patrick popped the question to which Jennifer said Yes! Then, on June 26, 2009, the love birds walked down the aisle.

Since then, the duo’s marriage has been going strong, and Patrick and Jennifer’s bond is still the same. Furthermore, the married couple often gushes about each other in the media and their social media profiles.

As mentioned earlier, Jennifer Bet-David and Patrick Bet-David have been married for more than a decade now. In their twelve years of togetherness, the lovely couple became the doting parents of four kids, two sons and two daughters.

The couple is raising their kids with immense love and care. The Bet-David children seem to have a great bonding with each other.

Also Read: Find Out Who Is Alexander Zverev’s Wife.

Wanted To Pursue A Career In Entertainment World

Patrick Bet-David’s wife, Jennifer Bet-David, attended Houston Community College in 1999. There she took the major in Business Administration, Management and Operations, and graduated in 2001.

Furthermore, in 2013, she went to UCLA Extension for Writers program. Before getting involved in the business sector, she was interested in the entertainment world. As a result, during her high school, she entered the Ms. Houston pageant.

Jennifer was qualified to enter the Ms. Houston pageant, but she declined the opportunity to go to acting school. She also did a few modeling jobs and commercials in Houston and decided to pursue a career in Hollywood. She then moved to Oakwood and even landed a job working for Oakwood Apartments & Corporate housing.

When she was 21 years old, Jennifer moved to the Los Angeles area and pursued her Hollywood dream for a year and a half. However, she decided it was not all that glamorous, and she wanted to make real money and be someone important.

After Jennifer realized that Hollywood was not what she had expected, she decided to get her real estate license. Bet-David worked in real estate for a short time and was later recruited to an insurance agency in Encino, CA.

Jennifer worked for the agency as a top producing agent, and she got promoted to a broker, who supervised a team of agents. That’s where she met her future husband.

Three months after their wedding, the couple left the agency and decided to start their own. They started their own agency, PHP Agency, in Northridge, CA, in 2009. At that time, they had one office and 66 agents. In an interview with Voyage Dallas, Patrick Bet-David’s wife mentioned that despite lacking experience, she managed the company to the best of her abilities.

As of now, Patrick’s wife serves as the Executive Vice President of Agency Operations. Furthermore, she is also one of the board of directors of the agency along with her husband, Patrick, Greg Share, and Robert Kerzner.

Thus, she must have amassed a fortune from her work. On the other hand, her spouse, Patrick Bet-David is worth $150 million,

In addition, she has also created a women’s initiative within the organization called PHP Ladies.

The businesswoman created the initiative to inspire other women to get involved in the industry and motivate women to pursue their dream, support them in business, and compete to win as well. Along with that, she has worked as the PHP ambassador in a number of charity campaigns.