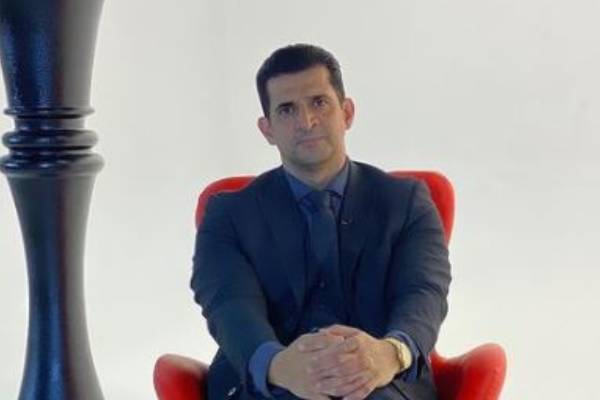 With the increase in technology and advancements, starting your own business has become a task that every individual wants to try. Well, some succeed, and some fail. However, those who succeed keep on adding more and more to their name and at the same time gain popularity too.

Among many business people and millionaires existing globally, Patrick Bet-David is a well-known name. He has gone from rags to riches to build a vast business empire, which has helped him amass a sizable net worth.

So, how much has the business tycoon amassed to his name? In this article, let’s find out about Patrick Bet-David’s net worth and earning details.

Patrick Bet-David Net Worth And Earnings

The Iran-born American financial adviser and entrepreneur, Patrick Bet-David, has mainly worked in the financing sector. He has founded several companies, which has helped him add more to his net worth. As per Wealthy Gorilla, Patrick Bet-David’s net worth is estimated to be $150 million.

Income From His Company

After completing high school, Patrick Bet-David served in the 101st Airborne Division of the US Army. He began his financial services career after being discharged from the Army. He began his career with the Transamerica Corporation and Morgan Stanley.

In 2009, Patrick founded PHP Agency Inc. It is a financial service marketing organization offering insurance products like 401K roll-overs, health insurance, and annuities. The company that is headquartered in Dallas, Texas, raised $10 million in 2017. It raised such a massive sum in Expansion Capital from a syndicate of private equity players like Ambina Partners, Atalya Capital, Oscar De La Hoya, and Gabriel Brener.

In 2019, PHP hosted a convention with 8,000 attendees where Kobe Bryant and President George W. Bush were guest speakers. His company is growing day by day, and he must be earning considerable money from the company.

Income From Other Business Ventures

Apart from his own company, Patrick has also been involved in several other business ventures. He is the owner of Valuetainment Media LLC. It is a company creating and syndicating the Valuetainment channel on Youtube and different other new media outlets (Roku, etc.). Valuetainment is an entrepreneur channel that Patrick had created. It has 3.18 million subscribers.

As per Social Blade, the estimated earnings of the channel is $1.7K to $26.8K monthly and $20.1K to $322K yearly. Thus, he must be bagging a good sum of money from the channel. Through Valuetainment, he shares his passion for business and encourages and educates tomorrow’s entrepreneurs.

In addition, Patrick also hosts PBD Podcast. There, he interviews many notable personalities. As of November 2021, the podcast has 100 episodes. Thus, he has possibly earned considerably from the podcasts and the YouTube channel.

Apart from the business ventures, Patrick has also tried his luck in book writing and has authored entrepreneurship-related books. He has authored several books, which became successful and thus helped him earn money. The table below shows some books alongside their prices, as per Amazon.

Apart from the books, Patrick Bet-David’s site also displays some merch, and one cannot doubt that the merch is also his source of income.

Here are some of the merch and their prices.

Looking at the different business ventures that he has been involved in, Patrick Bet-David’s net worth of $150 million seems considerable. Plus, we hope that his fortune will increase in the coming days.

As mentioned earlier, Patrick Bet-David’s net worth is estimated to be $150 million. With a colossal net worth like that, he must be able to afford a comfortable and luxurious lifestyle. He resides in Fort Lauderdale with his wife, Jennifer Bet-David, and kids.

In June 2021, Patrick bought a waterfront mansion in Fort Lauderdale for $20.4 million. The estate comprises six bedrooms and has an area of 10,436-square-foot. He and his wife financed their purchase with a loan worth $13.2 million from Goldman Sachs.

The sale beat the previous Bay Colony record of $11.5 million for a property that was sold in early 2020.

The successful businessman Patrick seems to be a car enthusiast. He has an impressive car collection. The collection includes cars of different brands like BMW i8, Lamborghini Veneno, and Rolls Royce. Furthermore, he must have arranged a good insurance policy for his cars.

Going through his Instagram, we can see that Patrick often travels to different places with his family. All thanks to his multi-million dollars worth fortune, Patrick and his family are able to live a great life.