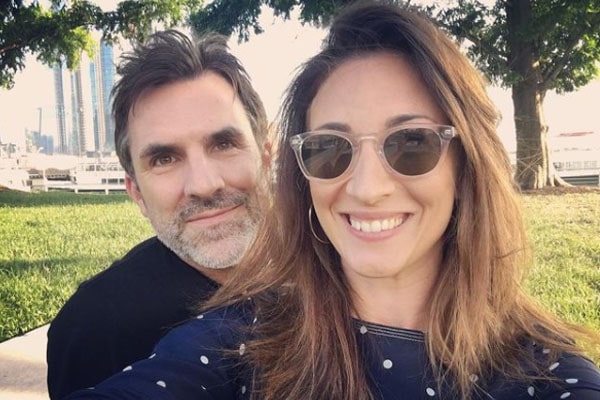 The American actor Paul Schneider is notable for portraying Mark Brendanawicz‘s role on the sitcom Parks and Recreation. Besides, he is also famous for his roles in other acclaimed movies such as The Assassination of Jesse James, Goodbye to All That, and Bright Star. The winner of a Best Actor in a Narrative Feature Award at Tribeca Film Festival, Schneider is currently an ambassador for the Innocence Project.

Besides being a successful entertainment personality, Paul Schneider is a responsible family man. He is in a marital relationship with an occupational therapist Theresa Avila since 2016. Here, learn some more about Paul Schneider’s wife, Theresa Avila, including her career achievements and her journey with her celebrity husband.

Married To Paul Schneider Since 2016

Paul is popular among his fans for playing the role of Otto Wall, a graphic designer, in the film Goodbye to All That in 2014. The viewers can hardly forget the moment when his on-screen wife, Annie Wall, played by actress Melanie Lynskey, stunts him with her intention to end their marriage. However, in real life, he is happily married and contented with his real-life wife, Theresa Avila.

Paul Schneider took the wedding vows with Theresa Avila, also known by Theresa Thelen-Clemmons, on 16 April 2016. According to The Knot, Paul and Theresa’s intimate marriage ceremony took place at 501 Union Street Brooklyn, New York, in the presence of their close friends and family members. Congratulatory messages were in order after their wedding day.

Schneider and Avila’s marriage has crossed almost four years, and their love for each other is still as secure as it was in the beginning. The jolly couple often flaunts their relationship on their respective social media handles. Their social media posts clearly depict how much they are in love with one another even after almost half-decade of their togetherness.

A Delighted Mom Of A Daughter With Paul Schneider

Paul Schneider’s wife, Theresa, enjoys capturing every special moment with her little girl and posts it on her Instagram. In fact, her gram is full of pictures with her daughter, Lou traveling to various destinations and having mother-daughter time in nature together. Theresa Avila and her daughter, Lou, also love to spend their time together on the beachside.

Works As A Vice-president Of The World Lens Foundation

Born in Seattle, Washington, Paul Schneider’s wife, Theresa, moved to New York City later to flourish in her career. She studied documentary photography at Seattle University and earned a degree in Sociology from Hunter College. After moving to New York, Theresa gained her Master’s in Occupational Therapy from Columbia University College of Physicians and Surgeons. Since then, she is serving as a pediatric occupational therapist and Vice-president in The World Lens Foundation.

According to Theresa’s Linkedin Page, she is also a Global Classroom Manager at The World Lens Foundation since November 2011. She also provides her service in the Connect The Dots Occupational Therapy PLLC and The IDEAL School of Manhattan.

Besides being a Pediatric Occupational Therapist in several organizations, Theresa Avila is a team leader at New York Cares. Similarly, she is on the Advisory Board of the Peace Crane Project since December 2018.

The Licensed Occupational Therapist, Paul Schneider’s wife, Theresa, is enjoying her married life with a loving and caring husband. It seems like Schneider’s marriage with Avila will also be listed as one of the strongest marriages in Hollywood. We wish the duo all the best for their long-lasting and merry relationship.