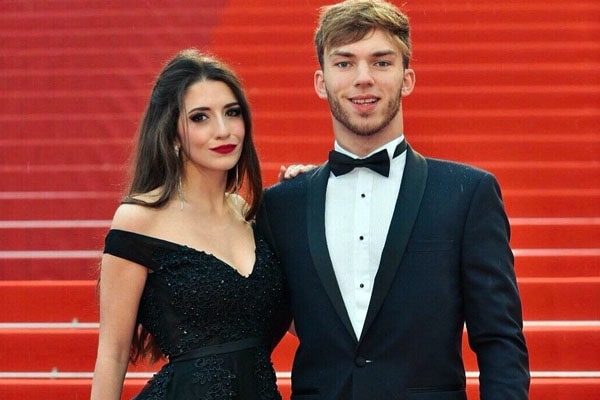 Pierre Gasly, the French racing driver, currently competing in F1 for Scuderia AlphaTauri, is the 2016 GP2 Series champion. Since making his debut in Formula One with Toro Rosso in the 2017 Malaysian Grand Prix, Gasly has been regarded as an authentic racing star in the making.

So, with the rising stardom of the AlphaTauri driver, the media and his fans are paying lots of attention to his personal life. So, here, let’s find out who Pierre Gasly’s girlfriend, Caterina Masetti Zannini, is and how their love life is going.

Unlike many other F1 driver’s partners, Pierre Gasly’s girlfriend, Caterina Masetti Zannini, is not in the modeling industry. Rather, the Italian beauty is reportedly pursuing her career in aerospace engineering.

Moreover, Ms. Zannini is also the brand ambassador of Passorcorto, a luxury footwear line. She recently joined the Passocorto team and is happy to be one of its integral members.

So, overall, the gorgeous lover of Pierre Gasly, Caterina Zannini, is a star on her own. From being an aerospace engineer to handling the position of a brand ambassador, she is doing great in her chosen career paths. Also, it looks like the Bologna native is earning enough to enjoy a lavish lifestyle.

One of the celebrated couples of the motorsports industry, Pierre Gasly, and Caterina Masetti Zannini, have maintained secrecy about their love life. As a result, most of the details of their relationship are still unavailable to the public. However, according to reports, the two started dating from the start of 2018.

Both Pierre and Caterina were often seen posting pictures of them traveling together on their respective Instagram pages. Caterina even used to attend some of her boyfriend’s races and accompany him in various public events. In addition, both of them were very open to show their love for each other via their social media handles.

However, lately, both Gasly and Zannini have not posted snaps of each other on their social media pages. The pair have stopped featuring one another in their respective pages since April 2020.

Moreover, it has been a long time since the pair are seen together in public. So, there have been rumors that Pierre and Caterina might have ended their relationship.

However, there might also be a possibility that both Pierre and Caterina want to protect their relationship from excess media scrutiny. So, we might have to wait for a while before they clarify their status themselves. Hopefully, Caterina Masetti Zannini is still Pierre Gasly’s girlfriend.

Before his relationship with Caterina Masetti Zannini, Pierre Gasly does not seem to have dated any other girl in the past. If he had been in a romantic relationship, then it is completely hidden from the reach of the media. So for the public, Caterina is the F1 driver, Pierre Gasly’s first love.

We hope Pierre Gasly and Caterina Masetti’s love life will continue till eternity, and they will establish themselves as one of the long-lasting couples in the motorsports world.