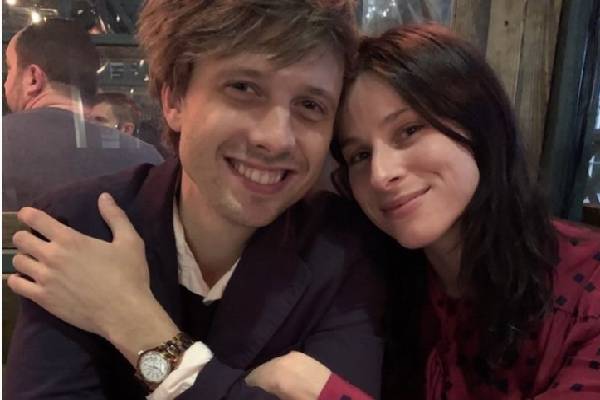 Born as Sasha Rebecca Spielberg, Sasha Spielberg is an American actress and musician best known for her works in The Terminal (2004), The Art of Getting By (2011), and Munich (2005). She is also known by her stage name Buzzy Lee.

Who Is Harry McNally?

According to People, Sasha Spielberg’s fiancé Harry McNally is an artist or designer based in New York City. He is also a musician who has released a song called Papaya. He has also directed music videos for artists such as Selena Gomez.

Harry’s father, Keith McNally, is a well-established restaurateur in New York. Keith has been active in the New York City restaurant scene since the 80s. He owns several restaurants, including Augustine, Balthazar, Cafe Luxembourg, and many more.

Although Harry’s father was born into a working-class family in London, Sasha Spielberg’s fiancé is lucky to be born as the heir of a successful restaurateur. Sasha’s husband-to-be is the grandson of an amateur boxer and docker, Jack McNally and Joyce McNally.

The daughter of Steven Spielberg, Sasha Spielberg, got engaged to her then-boyfriend, Harry McNally in late 2021. Harry’s father announced the engagement by sharing the lovely picture of his son and soon-to-be daughter-in-law on his Instagram.

Sasha’s soon-to-be father-in-law seemed more excited and happier with the engagement of his beloved son as he was the first person to announce the good news. Later, Sasha also shared the good news by sharing the picture of her engagement ring on her Twitter.

Sasha Spielberg’s fiancé, Harry McNally also seems head over heels for the actress. All of their confession through social media makes it clear how much they love each other.

The lovebirds first met during the pandemic. Sasha went through a break-up at the beginning of the Covid pandemic and met her soulmate in November 2020, soon after the pair started dating and got engaged in late 2021.

Both Sasha and Harry regularly share pictures of them cozying up with each other and proudly announce their love for each other through their respective Instagram.

In July 2021, The Terminal actress shared a picture with her love and proudly said that Harry is her and she loves him.

Although the wedding has not been scheduled yet, we wish the couple all the happiness in the world. Moreover, Sasha Spielberg and Harry McNally’s love for each other seems true and both of them are enjoying each other’s company.

Aforementioned, Sasha Spielberg’s partner, Harry is an artist, designer, and musician. As per Glassdoor, musicians make from $27K to $79K per year. And let’s not forget he is the heir of his father’s multi-million dollar.

Talking about the star of The Art of Getting By, Sasha earns a decent amount of salary from her acting career. According to Zip Recruiter, the salary of an actor/actress ranges from $20K to $220K. Thus it is safe to assume that Sasha has quite a fat bank account. In addition to that, she is also a musician. So she must earn a considerable amount with her second title too.

Sasha went through all the stages of love in 2021 and it inspired her to release a new solo album, Spoiled Love. Although she hasn’t disclosed whom she broke up with, Steven Spielberg’s daughter is now clear about the person she wants to spend her life with.

There is not much information about Sasha’s ex-boyfriend. Though she is busy establishing herself as an actress and singer and went through heartbreak, she managed to find a perfect guy for her.

Sasha and her love Harry are in a loving relationship. Both of them seem happy and content with each other. We would love to hear another good news about their career and personal life. Nonetheless, we wish Sasha Spielberg and Harry McNally a lasting relationship filled with joy and happiness.