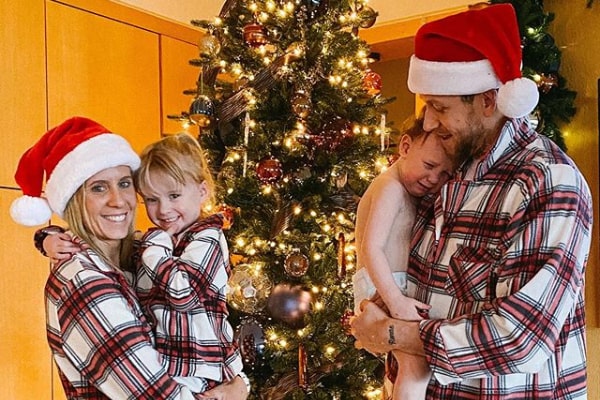 The family of four is going throuh thick and thins together. Image Source: Ingles' instagram.

Born on July 18, 1986, in Melbourne, Australia, Joe Ingles’ wife, Renae Ingles aka Renae Hallinan, has established herself as an accomplished athlete throughout the world. The sweet couple of NBA player and the winner of Netball World Championships in 2015 has been together for a long time. Furthermore, the couple had recently announced their pregnancy a week ago.

Joe has enjoyed a successful NBA career, but his wife, Renae, was victorious throughout her career. Let’s find out more about the beautiful blonde beauty in this article.

Joe Ingles’ partner, Renae, is known for her time with the Australian Thunderbirds of the ANZ Championship. Furthermore, she gained more popularity playing for the Australian national team. Born and raised in Australia, Renae started her career with the Melbourne Phoenix and played five seasons for the team. She later joined the Melbourne Vixens in 2008 in the new ANZ Championships.

Gradually, Mrs. Ingles became a prominent member of the Vixens lineup that won their first ANZ Championship title. However,  she moved on to Adelaide Thunderbirds for the 2012 and 2013 seasons. Renae stayed with Thunderbirds for several years until she announced her retirement after a pro career in netball.

However, the center player, Renae, returned to netball for Melbourne Vixens and was selected in the Australian Diamonds for the 2018/2019 international season.

Joe Ingles’ wife, Renae Ingles, aka Renae Hallinan’s career, is regarded as magnificent. Furthermore, her other significant achievements include:

After an impressive performance throughout her career, Renae announced her retirement at the end of the 2019 season.

Therefore, it is rightful to say that Renae excelled in her career. Besides her professional victory, she was quite a good scholar, not to mention a secret keeper. Mrs. Ingles attended Carey Baptist Grammar School, Australia. Although her career was bright and was possibly under scrutiny, she has maintained her privacy pretty meticulously.

When Did Joe Ingles and Renae Hallinan Marry?

A beautiful relationship exists when two people involved in it motivates one another to become a wise person and pushes to our limits to become the best version of ourselves. Such is the marriage of Joe Ingles and Renae Ingles. The couple met at a very young age, in fact, initiative years of their burgeoning career. Although the story of who won and were celebrating during their first meet alters, the couple bonded over coffee.

Furthermore, Renae Ingles’ husband says that he realized he wanted to marry her within those moments and cherished the relationship dearly. The realization happened in 2006. Despite the hurdles and busy schedules, the couple maintained their relationship and by 2014, they were engaged.

Things went superfast since then. In no time, it was August 29, 2015, and the couple was happily married. Similarly, the couple announced their pregnancy by 2016. Mrs. Ingles gave birth to twins on July 26, 2016; son Jacob Antony Ingles and a daughter Milla Bernadette Ingles. A child’s birth is monumental for any parents, but for Joe and Renae, it helped them grow stronger together.

The couple documented their relationship in their social media, and we can see how cheerful and happy the Ingles family is. Additionally, their happiness is about to exceed within November 2020 as they announced the arrival of their new member of the family.

Parenting is not an easy job. Honestly, a child starts learning from a very grass root level, which is why it is crucial to plan of having children beforehand. This is crucial because a parent is responsible for raising another sensible human.

NBA player Joe Ingles’s spouse, Renae, is a perfect example of a prepared parent. She is a phenomenal mother. As previously mentioned, Joe and Renae grew stronger as individuals and as a parent.

The couple revealed that their son Jacob had been diagnosed with autism. The diagnosis schedule was heavy, but their son, Jacob, is a warrior and has been adapting to it thoroughly. Furthermore, both Joe and Renae are optimistic about their child’s development acknowledging the lengthy process.

The couple was overwhelmed with the support they received from their fans. Likewise, they were proud to represent and raise awareness of ASD. Renae is doing an excellent job as a mentor to her son. Furthermore, the couple is practicing and building relationships along the way. They are eager to give all the happiness to their children and raise them to become a responsible human.

Let’s hope for the best to this couple as they overcome their hardships.