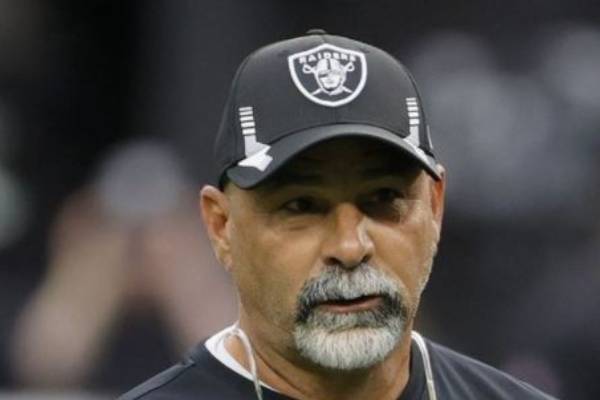 Jeanne Bisaccia and her husband Rich Bisaccia have been married since 1984. Image Source: ESPNFL Instagram.

Rich Bisaccia is the interim head coach of the Las Vegas Raiders in the National Football League (NFL). He was offered the job after the resignation of the head coach Jon Gruden. Prior to this, he was working as the assistant coach of the Raiders under Gruden.

Furthermore, Rich is married to his beautiful spouse, Jeannie Bisaccia. The pair have been happily married since 1984 and their marriage is a prime example to all aspiring lovers around the world.

In today’s article, let’s take a look at Rich Bisaccia’s wife Jeannie Bisaccia and discuss their blissful marital life. Additionally, we will also be talking about the couple’s children.

Jeannie Comes From A Nursing Family

Jeannie Bissacia aka Jeanne Jons Bisaccia was born on 21st December 1962 in Sioux City, Iowa. Her parents’ names were Henry Jons and Ann Julie Jons. She completed her schooling at West High School in her hometown of Iowa. After completing high school, she joined Mount Marty College and earned her Bachelor of Science degree in Nursing.

Jeanne’s mother was an ER Assistant Supervisor at St. Luke’s Hospital in the city. Furthermore, she ran and managed the addictions program at the Sioux Valley Hospital. Additionally, her mother also wrote operating manuals for the drug addicts, helping them to detox and fix their eating disorders due to drug addiction. Sadly, her mother passed away on 26th May 2011.

Also Read: Get To Know About Jim Boylen’s Wife, Christine.

Is A Mother To Four Children With Rich Bisaccia

Jeanne Bisaccia tied the knot with her then-boyfriend, Rich on 28th July 1984 at New Fairfield, Connecticut. The couple seems to be very happy and delighted with their marriage.

Moreover, Rich Bisaccia’s wife Jeannie has given birth to one son and three daughters during their marriage. Michele Ann Bisaccia, the eldest daughter of the couple, was born in 1984. She is happily married and works as an English teacher at Bradford High School.

Elizabeth Ann Bisaccia is the second daughter of Rich and his wife. She was born in June 1989 and is married to Brian Champ.

Then, Rich Bisaccia’s spouse gave birth to their only son, Richard Oakley Bisaccia aka Richie Bisaccia, on 21st July 1994. Richie seems to be interested in football. He played as a linebacker at college for the Middle Tennessee State University.

It is evident that one of four children of the Busaccia couple has followed in Rich’s footsteps into sports. Let’s hope we get to learn more about the family in the coming days.

Rich Bisaccia’s partner Jeannie Bisaccia is quite active on social media platforms. She has an Instagram account with only 327 followers but it is set to private. She also has a Facebook account where we can see her sharing pictures with her family. It seems she does not mind sharing her life details publicly occasionally. Jeanne appears to be quite an outgoing and fun-loving person.

Nonetheless, Jeanne must be living a luxurious life as her husband Rich Bisaccia’s net worth is estimated to be around $1.5 million. Furthermore, she has gone on to become a grandmother as well. Aforementioned, her daughters are all married and Jeanne has four grandsons and a granddaughter. Therefore, she must be loving life as a grandmom taking care of the little ones.

We wish Rich Bisaccia’s wife, Jeanne Bisaccia all the best for the future.