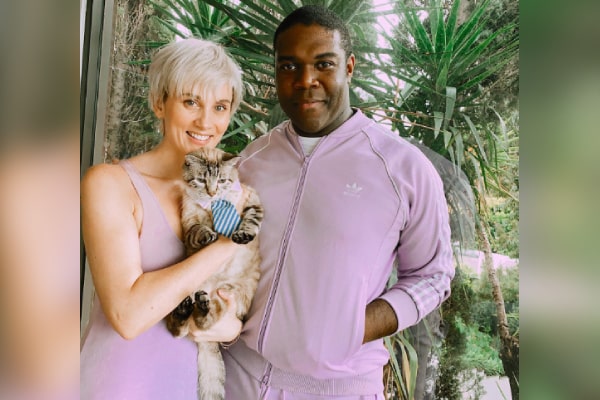 Sam Richardson is a famous actor, comedian, writer, and producer from America. After starring in the HBO political comedy series Veep, he gained worldwide recognition. The Michigan native actor has worked in several other top-rated television series, including Detroiters, I Think You Should Leave with Tim Robinson, and The Afterparty.

With his career stretching nearly two decades, the talented actor’s personal life has become the subject of interest to the public. Talking about which, the Afterparty star is in a loving relationship with Nicole Boyd. Thus, in this article, let’s learn more about the successful actor’s girlfriend, including their sweet story.

Who Is Sam Richardson’s Girlfriend?

Many sites have reported that Sam’s girlfriend, Nicole Boyd is the ex-wife of a famous skateboarder and stunt performer, Bam Margera. On the other hand, Boyd has introduced herself as the proud wife of Bam and momma bear in her Instagram bio, where she is active under the user name @Nikkib124 and full name Nicole Boyd Margera. However, the Veep actor and Margera’s ex-spouse don’t follow each other on social media.

Although the talented star shares many pictures with his lover, he avoids using tags and only mentions her by her first name, Nicole. Another interesting fact is Bam Margera’s ex-wife has tattoos on both of her arms, whereas Sam’s partner doesn’t. So, are Sam Richardson’s girlfriend and Margera’s ex-spouse different people?

Well, it’s very likely that the pixie-haired lady is different than the skater’s ex-partner. However, the truth can only be revealed by her.

Together For Several Years

As mentioned above, Nicole and her boyfriend have been in a loving relationship. The duo has not disclosed any details about when their love story began. But, they were first seen together at the 2017 Film Independent Spirit Awards sponsored by Jeep at Santa Monica Pier on 25 February 2017 in California.

In addition, Nicole and her partner have accompanied each other to many other public events and award ceremonies, including The Hollywood Reporter and SAG-AFTRA Annual Nominees Night in September 2018 in Beverly Hills. Similarly, the lovebirds also attended the premiere of the final season of “Veep” at Alice Tully Hall in March 2019 in New York City.

Looking at the actor’s Instagram posts, he and his lady seem to have been together since 2017. The former made their relationship public via a Valentine’s post. Additionally, Nicole Boyd’s boyfriend shares a lot of pictures of them traveling to different places. They both appear to be traveling enthusiasts. Not only that, the pair are also madly in love with each other.

Despite their togetherness, the adorable duo hasn’t exchanged wedding vows yet. Are they planning to get married soon? We look forward to their marriage.

Furthermore, Sam Richardson’s girlfriend is a woman of secrecy. Despite all the attention from the public and media, she has successfully kept her personal and professional life under wraps. Also, her boyfriend rarely speaks about their relationship in front of the media, and he seems to be making all efforts to protect Nicole’s privacy.

As already stated, Nicole and Sam have been together since the mid-2010s and share a solid bond. But they don’t seem to have welcomed any kids together yet. But, could it be the Richardson-Boyce couple is planning for kids? And, who knows, we might soon hear the good news. In contrast, the pair is parenting a cat together.

Nonetheless, Sam Richardson’s girlfriend appears to be enjoying her life to the fullest. She prefers a private life away from media scrutiny. In addition, her loving partner makes sure to respect her choices. We wish Nicole Boyd a successful career and a happy life ahead.