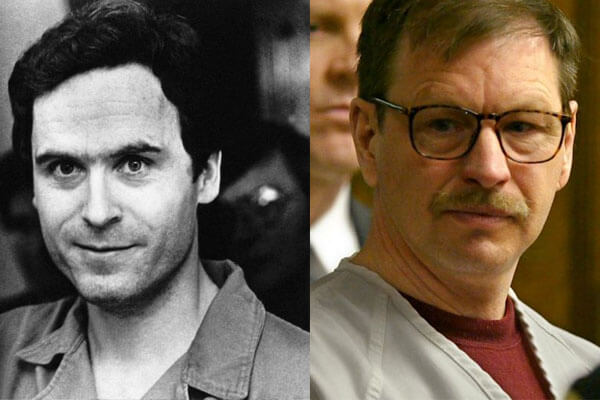 There have been many worst serial killings in the World’s history. In America, during 1970’s, and 80’s, Ted Bundy and Gary Ridgway who managed to act and live like normal people around their society turned out to be serial killers of women and teenage girls.

Nobody, not a single person around them could think that normal looking, charming and family person like them could have such a dark side. When we know and hear about such serial killers, their target, their method of killing, we see one thing common in them and that is they are psychopaths. They feel like they have achieved something through their criminal acts. And not being caught make them feel like winners and they don’t stop.

Ted Bundy and Gary Ridgway were both serial killers. Highly intelligent Killers, as it took a lot of time for the police to arrest them. They had the ability to comitt a crime without leaving any traces for the investigators. Let’s have a look at the similarities of these two Psychopaths:

1. Both Were Women Hunters, Rapist and Necrophiliac

Born on November 24, 1946, Theodore aka Ted Bundy had admitted that he had committed 30 murders, but crime experts along with people close to Bundy believe that his victims could be 100 or more. According to Netfilx series, Conversation with the killer; Ted Bundy Tapes, from the year 1974, Bundy started to hunt young, attractive college women near Washington, then Utah, Colorado and Florida.

Ted used his charming personality to attract the young woman along with faked disability to get the help of the victims to led him to his car. He also carried Police badge and impersonated himself as police and firefighter in order to gain the trust of victims. Bundy raped and murdered a lot of women victims by attacking them after they reached his car, used handcuffs to tie their hands and forced them into the Volkswagen Beetle he owned. He strangled the victims, raped them, dumped them in woods, mountains  and even revisited their corpses to gain further sexual satisfaction.

Gary Leon Ridgway is also known to have murdered 49 women in Washington but is claimed to have killed more. Born on February 1949, in Salt Lake City, Serial Killer Gary Ridgway is known as Green River Killer. He, like Ted hunted women, specially prostitutes and young runaways from 1982 in the route 99 area in South King County, Washington. Gary often brought most of his victims home, strangled them, raped and killed them. He then dumped his first few corpses of victims in Green River. Like Ted, Gary also revisited his victims’ corpses. He was also a Necrophiliac.

Bundy in his interviews said that he was lonely and shy as a child. Ted felt that all the attention was given to his stepfather’s kids from previous marriage. When he was in early teens, he started window peeping and fantasizing women. Bundy fell in love with a rich, beautiful girl at the age of 18, but the girl ended the relationship. She expected more from him than he could afford. This increased his loneliness. Bundy’s failures while getting involved in Arthur Fletcher’s campaign made him upset and urged him to do something he shouldn’t. Bundy developed a psychopathic personality. He raped his first victim and felt to have no choice but to kill her. And then, his journey of violent serial killing began which he enjoyed, and felt like accomplishments.

Gary Ridgway had a disturbing childhood. He was a poor student and is known to have been abused in his childhood. Grown up, he started working as truck painter and continued the same job for 30 more years. However, he was obsessed with deviant physical relation and frequently visited prostitutes. Soon, his desire became uncontrollable, aggressive and violent. When Gary first picked up a 16-year-old-girl,  living in foster home, and strangled her to death in 1982, he felt satisfied. He enjoyed taking the risk of killing women over and over again.

3. Both were married, had Girlfriends and a child

Ted Bundy is known to have been in multiple relations among which his long relationship with ex-girlfriend Elizabeth Kloepfer is well-known. He was heart broken from his first love relationship when he was 18. But with Elizabeth, Bundy maintained a long-lasting romantic relationship. Elizabeth, however, started becoming suspicious about her boyfriend’s acts and broke up with him, she also called the police to share her suspicions regarding Ted. Bundy then married his admirer Carole Ann Boone. Ted met his wife Carole while working at Washington State Emergency Department Services. Ted proposed Carole in his court proceedings and conceived a child, Rose Bundy with her while he was in prison.

Gary Ridgway, on the other hand, married three times, had a son, Matthew Ridgway, with second wife Marcia Brown. He looked like a regular guy. served in the military and also attended church. He had a steady job and according to his son, Gary was always there to be with him, was very polite and never even raised voice to his mother. It was a shock for him to know that his father Gary was a serial killer. Like Ted, he didn’t kill any of the women in his life. Possibly to build a clean profile.

4.Both were arrested and punished for their sins

Crimes can’t be hidden for long and criminals can’t escape from their sins. Even if it takes time, they have to pay for their sins. Serial Killer Ted managed to escape from prison twice, but still got arrested while driving in speed and suspicious way. He was given a death sentence and electrocuted to death in January 24, 1989.

It took two decades for Gary to be arrested finally in 2001. With the help of newly developed DNA-testing technology, the police obtained a match between Ridgway and evidence obtained from victims. When arrested, Serial Killer Gary admitted murdering more than 70 women and agreed to show the police where he had dumped the corpses of his victims. In December 2003, Gary was sentenced to life in prison.

Get more updates on celebrity entertainment, babies and news on Ecelebrity Mirror.