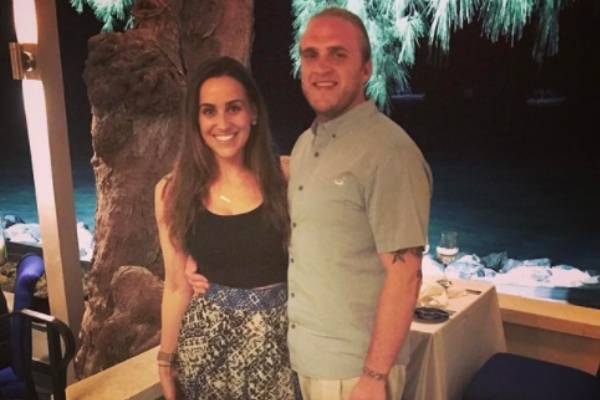 If you are fond of NFL, then you might be familiar with the name Stephen Belichick. He is the outside linebackers coach of the New England Patriots. His father, Bill Belichick, is the head coach of the team. Bill welcomed Stephen with his ex-wife, Debby Clarke Belichick.

Before working as a coach, Stephen played lacrosse as a defenseman and long-stick midfielder from 2008 to 2011. During his tenure as a player, he even played for Rutgers Football. However, his short stint as a player ended early, and he began coaching in 2012.

Besides his career, Stephen is also a family man. He is married to Jennifer Schmitt, and the couple is proud parents together. So, today we will be talking about Stephen Belichick’s wife taking a look into her life.

Stephen And Jennifer Might Have Bonded From Their Love For Lacrosse

Jennifer Schmitt is from Baltimore, Maryland. She attended Perry Hall High School and later joined Tufts University, where she studied occupational therapy. She seems to be a very outgoing and fun-loving person and is very popular on Instagram with 14.9K followers. Along with that, she can also be seen frequently posting pictures with her family.

During her college days, Jennifer played lacrosse. This might have been a significant factor in her bonding with her husband Stephen Belichick, who also used to be a lacrosse player. They met during their college days at Rutgers and started dating in 2007. Their love for lacrosse might have helped them to bond quite well.

The Couple Are Enjoying A Blissful Marital Life

Stephen and Jennifer got married in June 2017 at the Siasconset Union Chapel on Nantucket. The love birds have known each other for ten years before their marriage. On their wedding day, Stephen Belichick’s wife wore a beautiful gown designed by David Josef.  Jennifer also posted a picture on her Instagram with the caption,

“The only continuity, in life as in love, is in growth, in fluidity, in freedom, in the sense that the dancers are free, barely touching as they pass, but partners in the same pattern.”

Since their marriage in 2017, the couple seems to be living a joyful married life together. The love birds welcomed two children into their lives. Jennifer can be seen expressing her love and affection towards her husband Stephen on her social media sites.

On their wedding anniversary, Stephen Belichick’s spouse, Jennifer shares pictures from their wedding expressing her love, gratitude, and thanking him for his presence in her life.

However, giving birth to Hayes was a difficult challenge due to the pandemic. Jennifer revealed that the challenges and obstacles she had to endure during the pandemic were very severe.

Moreover, Jennifer and Stephen Belichick’s son Hayes was diagnosed with Group B strep Sepsis. The diagnosis compelled him to stay in the NICU for 21 days. Stephen Belichick’s wife expressed that it was very difficult for her, and when she thought she couldn’t love someone more than she already did, God showed her to love them a little harder.

The couple was also expecting a third child. But unfortunately, in April 2021, Jennifer went through a miscarriage. She announced the news on her social media expressing that the life inside her womb was not there anymore. This incident might have brought a difficult period of time for the couple.

Fortunately, the Belichick family are happy with their life now and are enjoying their time together. Let’s hope we will see more of them in the future.