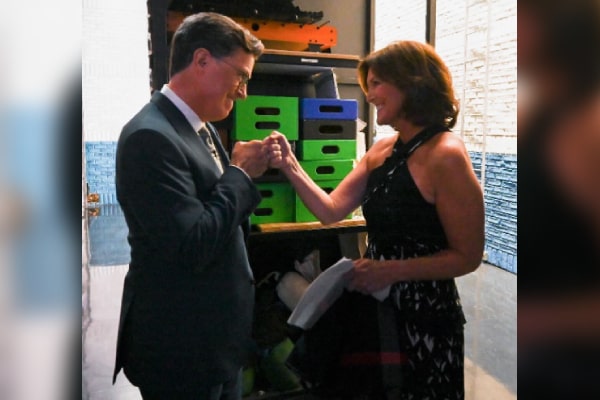 With all that said about the Washington, D.C native’s professional life, let’s take a look at his personal life. Well, Stephen is a married guy with few kids. He has been sharing a blissful marital life with Evelyn McGee-Colbert for nearly three decades. Thus, today let’s get to know Stephen Colbert’s wife, including how the pair first met. Keep reading!

First Met In An Afterparty In South Carolina

In 2016, one of his Late Show audiences asked Evelyn McGee-Colbert’s husband, when he first met her, how did he know she was the one. After jokingly asking how much time they had, Colbert began his story. Back in the 1990s, the talented writer was dating a girl, and she wanted to get married. But he was not sure about it, so he asked for some time to think and took a trip to Charleston, South Carolina, where he grew up.

While in his hometown, Stephen had a heart-to-heart talk with his mother and realized he was not ready for the wedding. Afterward, he accompanied his mother to the Spoleto Festival which is an opera by Philip Glass and Allen Ginsberg. That was when the comedian saw Evelyn for the first time, and he fell at first sight.

Afterward, Stephen and Evelyn started talking and realized they grew up together but went to two different schools. The producer added they knew so many people in common, they felt embarrassed because the pair thought their friends would find out from their stories that they were flirting with each other across a room at a party.

The comedian thought that she did not like her and was only being nice because their family knew one another. But, instead, love was blossoming between the couple. Eventually, Evelyn and Stephen started dating. After a while, the lovebirds tied the knot on 9 October 1993; the rest is history.

Also Read: Some Interesting Facts About Martha Kelly – Is She Married Or Not?

Is A Charleston Native

Stephen Colbert’s spouse was born on 23 July 1963 and grew up with her family in Charleston, South Carolina. As per The Sun, she is the daughter of prominent Charleston Litigation attorney and politician Joseph McGee.

Moreover, Mrs. Colbert graduated from the University of Virginia in 1985. On top of that, Evelyn has a double degree in English and drama. Later, the talented host’s spouse graduated from New York City’s Circle in the Square Theater School.

Evelyn Brabham McGee also goes with the cute nickname, Evie. Many people recognize her as the loving spouse of the comedian-writer Stephen Colbert. However, she has also achieved considerable success in her own career. She is into acting and has produced a documentary.

Evelyn started her career in the film industry in 1999 with the TV series Strangers with Candy. She also played the role of Clair Noblet for a movie with the same name. Furthermore, the comedian’s better half had small roles in The Hobbit: The Desolation of Smaug and Alpha House. In addition, the gorgeous lady has one credit for producing and cinematography. Plus, she has worked in nonprofit theater for several years.

Additionally, Mrs. McGee-Colbert is an independent film producer and is also a vice president at her husband’s production company, Spartina Productions. In addition, she is a founder of Montclair Film and serves as the president of its board of directors. Not only that, the talented TV host’s wife sits on the board of Charleston’s International African American Museum as well. Evie Colbert previously served as the director of development for both the Remains Theater of Chicago and the Drama League of New York.

Is A Doting Mother Of Three

During the long journey as a married duo, the Colbert couple has created a beautiful family. They have three amazing children, Madeline Colbert or Madeleine Colbert, Peter Colbert, and John Colbert.

The adorable pair entered into parenthood after welcoming their first baby, Madeline, in 1995. Afterward, Stephen Colbert’s spouse gave birth to their second baby, Peter, in 1998. Eventually, John joined his siblings in 2002, as the youngest member of the family. The Colbert family appears to have a solid bond with each other.

Furthermore, Evelyn’s daughter Madeline went to Yale College and studied Political Science and English and graduated in 2018. Likewise, John, who has some acting credits, is currently attending the same college and will graduate in 2025. In contrast, Peter has some directing and producing credits and not much known about his education.

Overall, Stephen Colbert’s wife is an amazing woman, a doting mother, and a loving partner. Aside from taking good care of her family, she has accomplished significant success in her professional life too. We wish Evelyn McGee-Colbert a more prosperous life in the coming days.