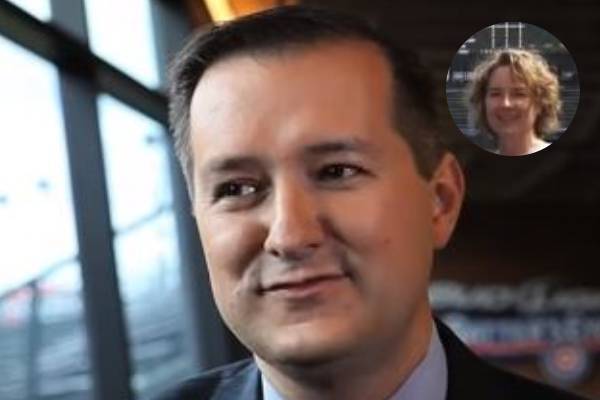 Thomas S. Ricketts is a well-known name in the baseball world, who is widely recognized as the chairman of the Chicago Cubs. He is also the co-founder, former CEO, and chairman of a firm, Incapital LLC. He has gained significant wealth and fame in his career.

The successful chairman of the Chicago Cubs, Thomas is happily married to his wife, Cecelia Ricketts. The couple’s marriage has remained the same ever since. So, how about we find out in detail about Thomas S. Ricketts’ wife, Cecelia, and their marital life.

As mentioned earlier, Cecelia Ricketts is married to the Chicago Cubs’ chairman, Thomas S. Ricketts. The couple first met in the bleachers at Wrigley Field. At that time, he used to live in an apartment above the Sports Corner across the street from Wrigley Field.

Thomas and Cecelia dated for a while and then tied the knot. The duo might have gotten together because of their shared interest in baseball. However, the couple had not revealed when they exchanged the vows. Nevertheless, Cecelia and Thomas’s marriage is still going strong, and they both support each other in their respective professions.

Furthermore, in their several years of marriage, the adorable duo welcomed five kids together.

Nonetheless, Cecelia and Thomas live a wonderful life together with their children in Wilmette, Illinois, away from the unnecessary media attention.

Thomas S. Ricketts’ spouse, Cecelia Ricketts, is a dermatologist by profession. She went to Woodlands of the Sacred Heart. Upon graduating from there, she studied at Creighton University. Furthermore, she went to Loyola University of Chicago, Stritch School of Medicine. From there, she graduated in 1992.

According to FabWags, Cecelia finished her training and education with her residency at Henry Ford Hospital. Then, she did her internship at Rush University Hospital. She currently works as a medical doctor and dermatology at the Skin Wellness Center of Chicago.

Therefore, Thomas S. Ricketts’ wife, Cecelia must have a considerable income from her profession.

As the wife of the chairman of the Chicago Cubs, Cecelia Ricketts lives comfortably. The Ricketts couple has invested in several properties over the years and moved houses a few times.

In June 2018, Thomas and his wife, Cecelia, sold their long-time home for $2.5 million. The mansion of vintage Colonial Revival-style consisted of eight bedrooms. They sold their home after finishing the construction of another mansion on Lake Michigan in Wilmette.

Cecelia and her husband, Thomas, paid $7 million for their new 0.67-acre lakefront site through a Delaware limited liability company. Then, the couple demolished the house and began constructing a mansion designed by a renowned new classical architect Robert A.M. Stern. According to Village Records, the estimated cost of the construction was $10.74 million.

Furthermore, The Ricketts couple also sold their 12-room mansion, which they purchased for $1 million in 2004. Thus, Cecelia and her husband must have benefitted well from the sales. Moreover, she must have contributed a certain amount while buying the house.

Thomas S. Ricketts’ spouse, Cecelia, is a caring wife and a doting mother of their kids. She lives a normal life away from the media attention. As mentioned earlier, she must be living a comfortable life with her kids and husband.