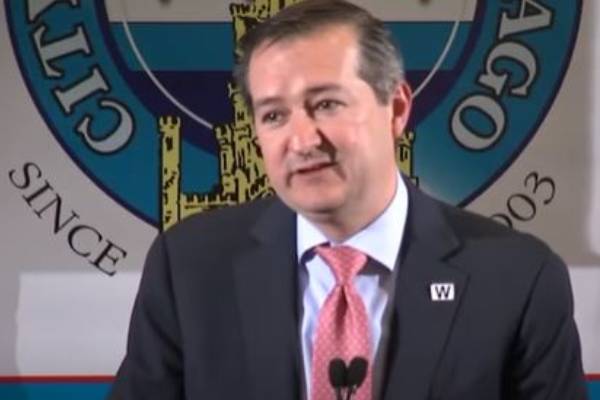 Thomas Stuart Ricketts, also known as Thomas S. Ricketts, is well-known as the Chairman of an American professional baseball team, the Chicago Cubs. He also co-founded Incapital LLC and is the Chairman and former CEO of the company.

Being the CEO of one of the most successful MLB teams, Thomas has not only gained immense fame but has also made a good fortune to his name. Moreover, several people are curious to know how much the Chairman has accumulated.

So, here, let’s learn about Thomas S. Ricketts’ net worth and his earning details.

As the Chairman of a baseball team and a company, there is no doubt that Thomas has made an enormous amount of money from his career. According to Celebrity Net Worth, Thomas S. Ricketts’ net worth is estimated to be $900 million.

Income As The Chairman Of The Club

On January 22, 2009, Thomas Ricketts, his dad, Joe Ricketts, and three siblings, Laura Ricketts, Todd Ricketts, and John Peter Ricketts, were selected for the winning bid to buy the Chicago Cubs and its related entities. As per Forbes, Thomas, his siblings, and his father made a total of $900 million offer, out of which the Cubs represented $642 million.

Six months later, on July 6, 2009, Thomas and his family reached an agreement with the Tribune Company in order to buy the Cubs, 25% of Comcast SportsNet Chicago, and Wrigley Field for close to $900 million. Three months later, on October 27, 2009, they officially took over the 95% ownership of the Wrigley Field, Cubs, and 25% ownership of Comcast SportsNet Chicago.

Also Read: Learn How Much Was Michael Clarke Duncan’s Net Worth At The Time Of His Death?

Income From The Business Ventures

The Ricketts family is considered to be one of the most influential and richest families in the sports world. After owning the Chicago Cubs in 2009, their business grew more, making them more prosperous. In July 2013, the Chicago city council approved the $500 million plan to renovate the Wrigley field. Thomas and his family privately financed the project.

Moving forward to March 2017, Thomas opened the first hotel with his family on Clark Street across from the front entrance of the Wrigley. Furthermore, Thomas serves as the co-founder, Chairman, and former CEO of Incapital LLC. Before joining TD Ameritrade as a director, he worked there one summer, and at that time, his job was to give customers stock quotes over the phone.

Moreover, Thomas worked for several companies, which provided him the experience and good income source. In 1988, Thomas completed his undergraduate studies at the University of Chicago. He then began to work as a market maker at the Chicago Board Options Exchange.

Thomas worked there until 1994. After finishing his MBA, he worked as vice president at Mesirow Financial. He served there for a year and then served as a vice president in the brokerage division of ABN AMRO. He stopped working at the company in 1999 to found Incapital.

The same year that he left ABN AMRO, the successful Chairman of the Chicago Cubs, Thomas Ricketts, co-founded Chicago-based Incapital LLC. It is a securities and investment banking firm and also a distributor, educator, and underwriter of securities and risk management investment solutions.

The firm has since expanded with two additional offices in London, England, Florida, and Boca Raton. Thus, he must be earning significantly from the company. Furthermore, he must have made a considerable sum from other family businesses.

According to Forbes, the Ricketts family had a net worth of $4.5 billion in 2015. Thus, he must have benefitted significantly from the family fortune. As a result, Thomas S. Ricketts’ fortune worth $900 million is considerable. Also, with his continuous success, one can assume that Ricketts will be a billionaire soon.

As mentioned earlier, Thomas Ricketts has accumulated a fortune worth $900 million to his name. All thanks to his multi-million dollars wealth, he is able to afford a comfortable lifestyle. In June 2018, the successful manager and his wife, Cecelia Ricketts, sold their long-time eight-bedroom vintage Colonial Revival-style mansion.

Thomas and his wife sold their home for $2.5 million after the completion of another mansion on Lake Michigan in Wilmette. They had paid $7 million for their new 0.67-acre lakefront site in 2013 through a Delaware limited liability company. After that, they demolished the house on the property. Then, with an estimated construction cost worth $10.74 million, they started to erect a mansion that was designed by Robert A.M. Stern, a noted new classical architect.

In 2004, Thomas bought the 12-room mansion for $1 million, which he and his wife later sold. He must have benefitted significantly from the sales, thus, increasing his net worth.

The Chicago Cubs chairman must be living a lavish lifestyle with his wife, Cecelia Ricketts, and five kids in Wilmette, Illinois. Nevertheless, we hope that Thomas S. Ricketts’ net worth increases in the future.