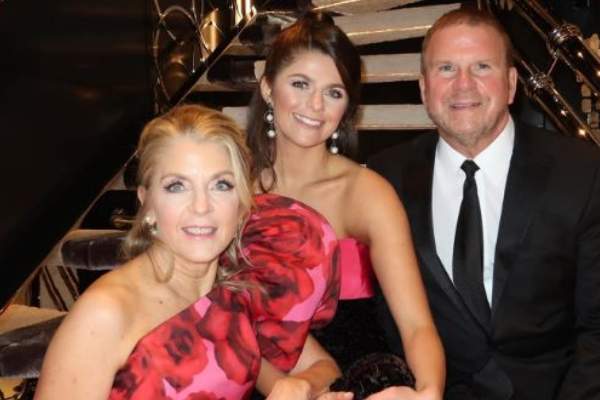 The American businessman did not always have a path full of petals. Although the successful businessman has a prosperous professional career, his marriage with Paige Fertitta could not be long-lasting. So, why did the ex-pair end their marital life? Let’s find out more about Tilman Fertitta’s ex-wife and the reason behind their divorce.

As mentioned earlier, Paige Fertitta was married to Landry’s CEO, Tilman Fertitta. It is not known when they met. But the pair worked as courtside fixtures at the Summit, currently known as Compaq Center. That was where they strengthened their bond. The former couple built their relationship through the team.

Every match was a date night for the ex-duo. Then, Paige and Tilman tied the knot in 1991. It must have been a lovely ceremony. It has also been reported that Tilman Fertitta’s former spouse turned down his marriage proposal thrice. Nonetheless, over the years, the husband and wife stood by each other’s side through every ups and downs.

Tilman Fertitta’s Ex-Wife Is A Proud Mother Of Four

After tying the knot in 1991, the former Fertitta couple expanded their family from two to six. Tilman Fertitta’s ex-wife gave birth to their four children, Patrick Fertitta, Blake Fertitta, Blayne Alexandra Fertitta, and Michael Fertitta. The kids have already grown up and are busy with their respective careers.

Paige Fertitta’s sons, Michael and Patrick, who went to Ole Miss and the University of Southern California, respectively, are also involved in their dad’s business. Nonetheless, the kids must have had a wonderful time growing up with such a big clan. Paige also must be proud of what her babies have achieved.

The Pair Ended Their Marriage

Paige and Tilman led a happy family of six after tying the knot in 1991. No one would have thought that one day the pair would have to go a separate path. After being married for twenty-six years, the Fertitta couple ended their marital life in 2017.

The estranged pair had a quiet divorce. Not many details have been divulged. Considering the businessman’s fortune is worth multi-billions, could Paige have been paid significantly in alimony? Plus, it has been reported that the ex-couple’s divorce was amicable. As such, both still share a lovely bond.

In such instance, Till Fertitta’s ex-wife, Paige Farwell, and their kids were with him for a week in the 2021 summer. On several occasions, the former husband-wife duo is present together. For instance, when Paige’s ex-beau was inducted into the University of Houston Athletic Hall of Honor, she was also present there.

Moreover, following the divorce, Paige Fertitta’s ex-husband tied the knot with Lauren Ware, a Houston attorney, in 2019. However, it is not known if Paige has found someone or is single. But she must be doing well.

Paige Is A Philanthropist

While Tilman has made himself popular through his business ventures, Paige has also made a different image of herself as a philanthropist. She has a heart for charity and is a die-hard animal lover. As of 2018, she was actively working with MD Anderson Hospital and the University of Texas Medical Branch.

Likewise, Paige also worked for the Houston Children’s Charity and the Houston Police Foundation. Furthermore, she is a lifetime member of the Special Children’s Committee at the Houston Livestock Show and Rodeo. In addition, as of 2008, she was active with the First Baptist Academy and Fay School.

The former Mrs. Fertitta also chaired the San Luis Salute Mardi Gras gala that benefitted UTMB Galveston. The ex-couple threw the party every year. Besides being a philanthropist, Paige is also known for her fashion sense. She even entered the Best Dress Hall of Fame in 2018. Talking of fashion, some of her style icons are Blake Lively, Kate Middleton, and Cindy Crawford.

Following the separation, Tilman Fertitta’s ex-wife seems to have remained away from the limelight. She is not active on social media and must be trying to keep herself lowkey. But, the mother of four does not remain away whenever celebrating her kids’ victories. All in all, we hope Paige soon talks about herself. We wish her good health and blissful days ahead.