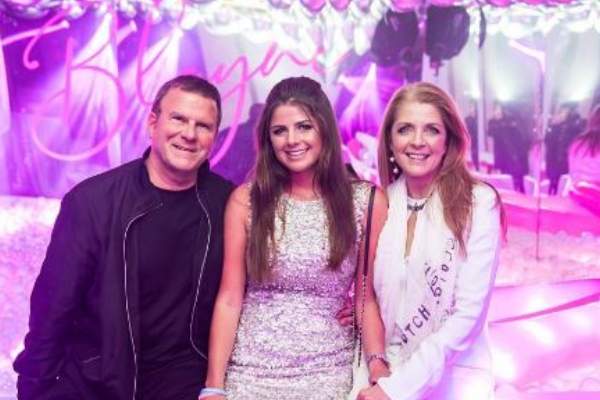 In the business world, Tilman Fertitta is a popular name. The business mogul was born Tilman Joseph Fertitta in Galveston, Texas, and went to the University of Houston but eventually dropped out. He is known for being the CEO, chairman, and owner of Landry’s, Inc. Furthermore, he owns the National Basketball Association team, Houston Rockets.

Talking about his personal life, the businessman is a proud father of four children, whom he shares with his former wife, Paige Fertitta. All four of them have already grown up and are doing good professionally and personally. As Fertitta has been in the limelight for many years, people are curious to know about his kids; thus, in today’s article, we will learn about Tilman Fertitta’s daughter, Blayne Fertitta.

Blayne was born Blayne Alexandra Fertitta in September 1997. She is the only daughter of Tilman and Paige. Talking about Blayne Fertitta’s parents’ job, her father is a businessman whose fortune mostly comes from Landry’s, Inc. Besides owning the Houston Rockets, he is also the chairman of the board of regents of the University of Houston System.

On the other hand, Blayne Fertitta’s mother is a philanthropist and has been involved with several charity organizations working for noble causes. Furthermore, Blayne grew up with three brothers. Her elder brother, Michael Fertitta, was born in September 1992. Then, Patrick Fertitta arrived in September 1994. Likewise, Fertitta’s youngest brother is Blake Fertitta, who was born in July 2001.

Blake went to Louisiana State University and graduated in 2022. Similarly, Michael graduated from South Texas College of Law in the same year. Patrick earned a business degree from the University of Southern California. So, where did Blayne attend college? Let’s find out further.

Blayne Fertitta is a college graduate. She went to Episcopal High School and graduated in May 2016. Just like her elder brother, Patrick, she also attended the University of Southern California.

In August 2020, Tilman Fertitta’s daughter graduated from USC Annenberg School of Communication and Journalism. She received a degree in public relations, and she also minored in business. Although she graduated in 2020, her graduation ceremony took place a year later, in June 2021, at Los Angeles Memorial Coliseum. Celebrating her milestone, Blayne Fertitta’s father posted a picture with her.

It has been two years since Ms. Fertitta completed college. So, has she started her graduate degree? Or has she started working on her dad’s business? Well, it is yet to find out as she has not revealed much.

Crowned Queen Along With Her Grandfather

In March 2019, a dazzling San Luis Salute to Mardi Gras was held at the Galveston Island Convention Center where Usher was one of the performer. It was a special “Mexico Magnifico” night for Blayne and her family, and this is why.

Tilman Fertitta’s daughter was crowned Queen of Momus along with her grandfather, Vic Fertitta, who was crowned King of Momus. The family celebrated along with notables and some surprise guests. Furthermore, she and her dad shared pictures of the event on their social media.

Mardi Gras Galveston was such a fun weekend! My daughter and father were crowned queen and king of Momus and I hosted @Usher at the San Luis Salute and @Alesso at our parade after party. #MardiGras #mardigras2019 #Galveston @ArtAcevedo pic.twitter.com/KiinPrOa9T

Likewise, back in December 2017, Blayne was one of the Duchess and a lovely debutantes at the prestigious Artillery Club’s 177th ball.

Tilman Fertitta’s baby girl has been in the media spotlight for not as long. But, she has been seen with several celebrity figures at different events. For instance, in October 2021, she and Kendall Jenner were together at her dad’s Dos Caminos restaurant in New York. Jenner displayed her talents by mixing her 818 Tequila Blackberry Mules and Cucumber Spritzes.

Blayne’s Parents Are No Longer Together

As mentioned earlier, Blayne is the only daughter of Tilman and Paige. Although the Fertitta family enjoys a lavish lifestyle all because of their successful business, the marriage of the patriarch and matriarch of the family could not be thriving enough. Her parents tied the knot in 1991 and were together for twenty-six years before calling it quits.

Furthermore, the former couple had quite an impressive start to their twenty-six years of togetherness. Blayne Fertitta’s dad proposed to her mom three times, and she turned them down each time. ‘Fourth time’s the charm,’ Blayne’s mom finally accepted the proposal. After all those years of being together, the loving couple divorced in 2017 for an undisclosed reason.

Despite the separation, the former duo still share a solid friendship and are often seen together on their kids’ social media. After parting ways, Blayne’s papa tied the knot with Lauren Ware. But there is no information on whether the former Mrs. Fertitta remarried or not.

On the other hand, talking about Tilman Fertitta’s baby girl, Blayne’s relationship, she has chosen to remain mum. Her social media does not hint anything about her romantic life, and she has never talked about it in media. So, Blayne Fertitta’s boyfriend remains a mystery for now.

Let’s hope Blayne talks about her personal and professional details soon. We look forward to hearing more from Ms. Fertitta and we wish her sound health and blissful days.