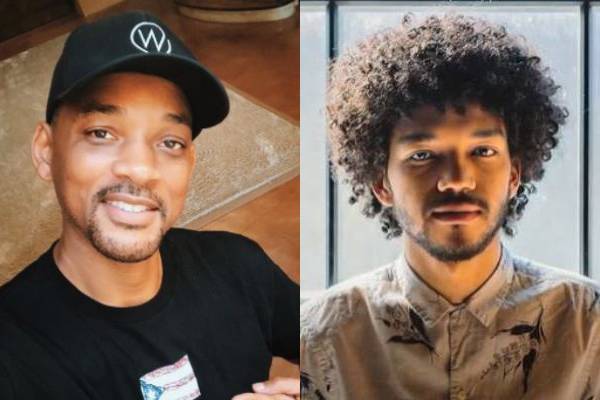 Justice Smith is rumored to be the son of Will Smith and his wife. Image Source: Will Smith Instagram/Social Media.

The entertainment industry, or let’s say Hollywood, has given birth to many talented personalities who have already established or are in the process of establishing themselves as prominent actors or actresses. There are a number of people who have gained significant success and fame within a short time.

One of those talents that have garnered success within a short time interval is Justice Smith. He has gained notoriety for numerous roles in movies and television series, including Theodore Finch in All the Bright Places, Tim Goodman in Pokémon Detective Pikachu, and Franklin Webb in Jurassic World: Fallen Kingdom.

It is common for most celebrities to be a topic of gossip and rumors. Just like other stars, Justice too became a topic of discussion because of his surname, which he shares with Hollywood star Will Smith. And many fans have questioned if Will and Justice are related?

So, in this article, let’s find out if Will Smith and Justice Smith are related.

Justice Smith, Rumored To Be Will Smith’s Son

When Justice Smith came into the limelight because of his works, fans and followers speculated he had some kind of relationship with Will Smith. Moreover, he has often been confused for one of the kids of Will Smith and his wife, Jada Pinkett Smith.

In an interview with Jimmy Kimmel, Justice talked about a video essay where someone said that he was banking off of nepotism. The essay apparently stated that he did not earn anything that he has, and it was all because of his dad. Justice was confused about the article but later realized that people thought Will Smith was his father.

Since they have the same surname, Smith, Justice Smith is often rumored to be Will Smith’s son. Moreover, both of them are also involved in the entertainment industry so, the confusion about them being father-son has continued to grow.

Justice Smith Was Starstrucked With One Of Will’s Kids

The rumors that Justice Smith is the son of Will Smith have existed for a long time. As mentioned earlier, Justice Smith talked about a video essay where he was said to be acting due to nepotism in an interview with Jimmy Kimmel.

In the same interview, Justice also talked about his experience when he met Will Smith’s son Jaden Smith, aka Jaden Christopher Syre Smith. Jaden and Justice had worked together on The Get Down, and they often met at the sets. The All the Bright Places actor shared that although he had met Will Smith, surprisingly, he was more starstruck with his middle child, Jaden.

Justice admitted that he didn’t usually get starstruck, but after meeting Jaden, he surprisingly did. Moreover, when Will’s son praised his work in the rehearsal, Smith looked away since he could not respond. He added that Jaden was very friendly and kind and came to the set multiple times.

So, Are Will Smith And Justice Smith Related?

Well, Will Smith and Justice Smith are not related. Having the same surname does not necessarily mean you’re related to that person. Therefore, Will is not the father of Justice. In fact, Justice Smith’s parents are Duilia Setacci and Wayne Smith.

Furthermore, Justice has often talked and tried to convince people that he and Will are not related. In September 2016, he even tweeted, saying he is not Will Smith’s son.

In addition, Justice’s Twitter bio blatantly says he is “Not Will Smith’s son.” Well, he has made it clear, and hope everyone has understood it by now that Will and Justice are not related.

Nonetheless, let’s hope we get to see the two Smiths together on screen in the future.