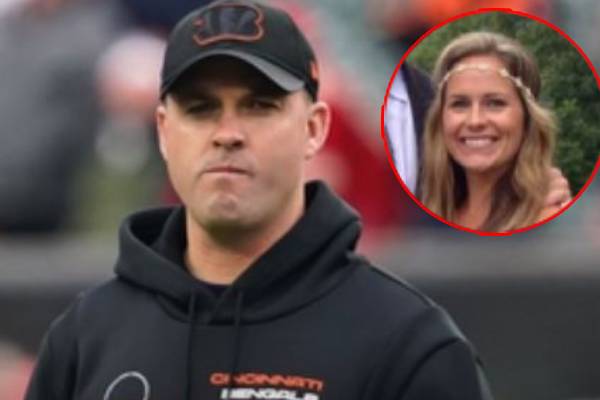 Zachary Taylor, also known as Zac Taylor, is one of the most famous names in the sports world. Taylor currently serves as the head coach of the Cincinnati Bengals of the National Football League (NFL). He had a brief playing career and even worked as an assistant coach for two different teams Miami Dolphins and Los Angeles Rams. He has gained significant fame and success in his professional career. Moreover, he has also earned a massive sum of fortune to his name.

Because of the growing fame, Zac’s personal life has also become a topic of interest for many NFL fans. They are often curious about his marital life and kids. He has been married to Sarah Sherman for a long time now, and he shares four kids with her. In this article, let’s learn in detail about Zac Taylor’s wife and their whereabouts.

Met While At The University

As mentioned earlier, Zac Taylor shares a blissful marital life with Sarah Sherman. Zac and Sarah met for the first time in 2005, while they were students at the University of Nebraska. At that time, Zac Taylor’s wife, Sarah, was pursuing a Master’s degree in journalism and marketing. Moreover, she worked as a graduate assistant in the university’s sports information department at that time.

Similarly, Zac was playing for the Nebraska Cornhuskers as the quarterback. As part of the job, Zac’s spouse would get the players to talk to the media after practices and games.

While speaking with Sports Illustrated, Sarah’s husband recalled the first time meeting her. He shared that when he saw her first time, they were practicing on the soccer field at Nebraska, and after the practice ended, he noticed her wearing a yellow dress. During their first encounter, he thought she was much more mature and even guessed her age to be 30.

As the time passed, Zac realized that they were of the same age and used to run into her. The couple realized that they had a lot in common as they came from big families whose family members were involved in football, and they were the eldest child of their parents. They must have bonded over these common things. Six months after meeting, the duo bumped into each other at The Rail and eventually began their relationship.

The lovebirds were immensely in love with each other, and since then, they have been together. As time passed, Zac and Sarah took further steps in their relationship.

Proposed During A Mini Golf Game

After dating for a while, Zac thought about taking their relationship further. Interestingly, only after a month of dating, he had thought Sarah was the one he could spend the rest of his life with within.

While talking with Modern Luxury, Sarah Sherman’s husband, Zac, recalled shopping for an engagement ring. He shared that Sarah wanted a gold braided ring with one diamond in the middle, and he could not find that. So, he paid a jewelry designer in Oklahoma City to make the ring that was based on a design that Sarah loved, i.e., David Yurman design.

Sarah’s spouse mentioned that he had the ring just two days before the proposal. And during a mini-golf game, he popped the question. He requested staff to keep the ring in the 12th hole. The NFL coach even asked them to hide the ring and capture the photos while he proposed.

Speaking about Zac Taylor’s then-girlfriend’s experience regarding the proposal, she discovered the box inside the 12th hole after making a shot and removing the ball. Then, Zac proposed to her. The engaged couple exchanged the vows in 2008.

Zac and Sarah Taylor’s wedding ceremony took place at St. Anne’s Catholic Church in Houston. The married pair held their reception at River Oak Country Club. The major theme at the wedding was Football and there was a football-shaped cake for the groom.

Since then, the married couple has been living a wonderful life together, and they later grew their family from two to six by welcoming four kids.

It has already been more than ten years since Zac Taylor, and Sarah Sherman exchanged the vows. In all these years of being married, the lovely couple became the doting parents of two daughters and two sons. Zac Taylor’s wife, Sarah, entered into motherhood for the first time with the birth of their eldest child Brooks Taylor in 2011. Then, in 2013, Sarah gave birth to their second son, Luke Taylor.

Sarah and Zac welcomed their third child, Emma Claire Taylor, in 2017. Similarly, their youngest kid Milly Taylor arrived in April 2018. Sarah Taylor’s husband has always appreciated her for being a stay-at-home mom and football coach’s wife. The Taylor family must be having a wonderful time with each other, and let’s hope they continue to live a amazing life together.

Comes From A Football Family

The Cincinnati Bengals coach, Zac Taylor, is indeed lucky to have Sarah as his wife as they both come from football families. Zac Taylor’s spouse, Sarah Sherman Taylor, is the eldest daughter of Karen Sherman and Mike Sherman, the former NFL coach. She has four younger siblings, and while growing up together, they lived all over the country with their parents.

Sarah’s dad, Mike Sherman, coached the NFL and college football. According to Heavy, Sarah and her family had moved 13 times and owned 11 homes by the time she was 18. Due to this, she had to adjust to a new school and go through the process of making new friends time and again. While giving an interview, she mentioned that because of that, she was forced to be the outgoing person that she is now.

Interestingly, Sarah Sherman’s husband, too, worked with her dad at Texas A&M and in Miami Dolphins. Zac Taylor’s partner revealed that she learned to handle being a coach’s wife by seeing her mom, who was with her dad for 31 years of his coaching career. Sarah stated that she always thought about how her mom remained calm during tough times no matter what position he was in. She also made sure to have a life and friend outside the football world.

Moreover, Sarah also shared her concerns regarding how the coaches get treated in college and the NFL. Zac’s spouse seems to have understood the responsibilities of being a coach’s wife, and maybe that’s the reason the couple has successfully balanced their professional and personal life.

Zac Taylor’s Wife Identifies Herself As A Blogger Mom

Sarah Taylor has been involved in football since a young age. Because of that, it has become easier for her to know about the sports and the responsibilities that come along with being a wife of the NFL coach. Talking about her professional life, she has identified herself as a blogger mom, according to her LinkedIn profile.

Zac Taylor’s wife, Sarah, attended Marquette University in Wisconsin and graduated in 2005 with a degree in Journalism. Then, she attended the University of Nebraska, from where she graduated with a degree in marketing and journalism in 2007. Mike Sherman’s daughter applied her journalism and writing skills to include her family’s journey through the football world on a blog, Big Mama Taylor.

Sarah has mentioned their day-to-day life in the football world in the blog. As mentioned earlier, she is a stay-at-home mom, and she seems to be enjoying that. Nevertheless, Zac’s partner must be in great health and let’s hope we get to hear more about her in the coming days.