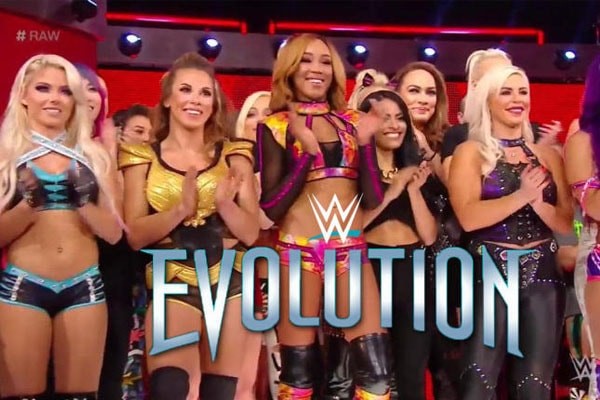 The pro-wrestling has been dominated by the men in all of its history. The big and strong men are the ones that headline wrestling events and are advertised as main eventers. Women are barely featured on the show and rarely are they placed anywhere near the main event. But that is set to change as WWE, the biggest wrestling promotion in the world will host its very first women-only pay-per-view event, Evolution.

The event was announced by Stephanie McMahon, who is one of the principal owners of WWE as well as the daughter of CEO Vince McMahon. She was accompanied by Vince McMahon, Triple H, and all the women working for WWE as this historic announcement was made on the July 23rd episode of RAW.

As per the announcement, WWE Evolution will take place on October 28, 2018, at the Nassau Coliseum in New York. The event will be streamed exclusively in the WWE network and will feature all the women from RAW, Smackdown, and NXT. In addition, the finals of the 2nd ever May Young Classic will be contested at the event, making it historic in every sense of the word.

With the announcement of this historic event, it serves as the continuation of the WWE’s so-called “Women’s Revolution”. This term refers to WWE’s increased interest in promoting women’s wrestlers and matches. It all started in WWE’s developmental territory NXT, where under the tutelage of Triple H, women were given more emphasis, getting long matches and prominent position on the card.

That translated to the main roster when Stephanie introduced three of NXT’s biggest women’s wrestlers to the main roster: Charlotte, Becky Lynch, and Sasha Banks. Since then, women have been a major staple of WWE and stars like Charlotte, Asuka, Alexa Bliss, and Sasha Banks have been featured prominently and with the recent signing of Ronda Rousey, women’s wrestling is at an all-time high.

Women’s wrestling’s progression is pretty visible with women being featured in high profile matches under the WWE umbrella. They have even been given the opportunity to headline a pay-per-view as Sasha Banks and Charlotte starres the main event the 2016 Hell in a Cell event. And now with a women-only event, this progression has reached the next stage.

WWE A Little Behind The Curve

While this announcement is pretty historic, one can’t help but notice that WWE are a little late in doing this. They are trying to make up for all the years they presented women as sexual objects and featured in pointless bras and panties matches. Other promotions like TNA were featuring women heavily since the 2000s whereas Japan has separate women’s wrestling promotions like All Japan Women’s Pro-Wrestling.

TNA has been promoting women for a very long time, Image Source: YouTube, we can say that WWE has been left behind and is trying to make up lost time. But we can also say that it is still a major step in the progression of women’s wrestling and serves the right purpose.