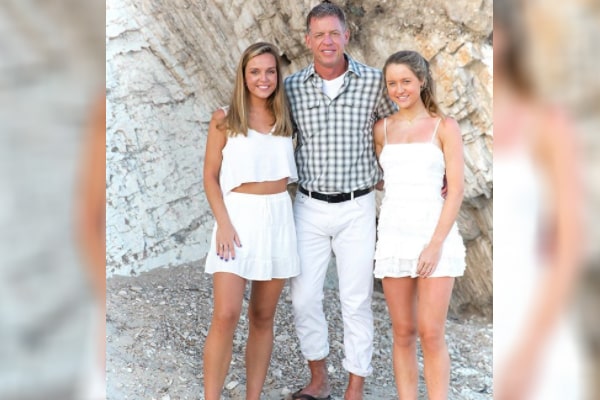 Troy Kenneth Aikman, aka Troy Aikman, is a former American football player who was a quarterback for the Dallas Cowboys in the NFL. Throughout his decade-long history, he was a six-time Pro Bowl selection, was the MVP of Super Bowl XXVII, and led the team to three Super Bowl victories.

Troy is a sportscaster for the Fox network and is a doting father of two adorable kids, Alexa Marie Aikman and Jordan Ashley Aikman, with ex-wife, Rhonda Worthey. Therefore, today, we will be talking about Troy Aikman’s daughter, Alexa Marie Aikman, in this article. Let’s join in and feed your brain cells of this ‘Lord knows when to utilize’ information.

Troy Aikman’s daughter, Alexa, grew up with her older sister, Jordan Ashley Aikman. Alexa is only a year younger than Jordan, and that’s why Aikman’s kids always had each others’ company. Furthermore, the Aikman girls used to visit their father during his games and cheer him.

Although there isn’t much on Troy Aikman’s daughter, Alexa enjoys her teen profoundly with her sister and friends from high school. Furthermore, she is very active on Instagram and often shares pictures with her family and rarely with parents. Besides Insta, she seems to be active on Vosco as well.

Furthermore, Alexa also has a half-sister, Rachel Früm Frands from her mother’s side.

Troy Aikman is a proud father of Alexa and hence posts her achievements often. It is unclear who the gorgeous child grew up with but going through Aikman’s Instagram, Alexa is undoubtedly close to her father as much as he loves her.

Alexa further seems to share her father’s interest in sports and plays Volleyball. Troy proudly announced his daughter’s excellence in school as a sophomore and in volleyball court via Instagram and wouldn’t stop anytime soon.

Furthermore, the mother-daughter relationship is also nice as Aikman’s ex-wife, Rhonda often posts about her on her Facebook.

Alexa Aikman’s Parents Separated When She was 9

Marriage is a work that some people may find beyond exhausting. Alexa’s parents, Rhonda and Troy, are among those. The former couple met while Rhonda worked as a publicist for the Cowboys, and Troy was the starting quarterback.

Troy Aikman and Rhonda Worthey shared vows on April 8, 2000, and welcomed two beautiful souls in the consecutive years. After nine years of holding their second daughter, Alexa, Troy and Rhonda announced their separation on January 24, 2011. Moreover, their divorce was finalized on April 12, 2011. Since both the Aikman’s kids were underage, the former couple must have agreed to joint custody and were present in their childhood.

Furthermore, Alexa Aikman’s father has moved on and announced his engagement to fashion retailer Catherine “Capa” Mooty in June 2017. Moreover, they celebrated their love with a posh wedding in the presence of friends and families on September 2, 2017, at the Biltmore Four Seasons in Montecito, California.

Both Aikman’s daughters, Jordan and Alexa, were present and ecstatic about their father’s new journey. Alexa Aikman is living a carefree life filled with love and only the tension of assignments. Let’s hope she remains blessed as she is today in the coming days.

The name Alexa is the female version of the male name Alex which could mean “to defend.”