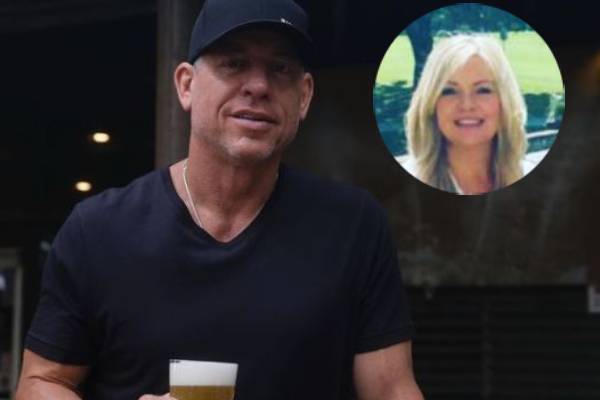 Troy Aikman, also known as Troy Kenneth Aikman, is a former National Football League (NFL) player who played as a quarterback with the Dallas Cowboys for 12 seasons. He had a successful playing career and retired in 2000. Since then, Aikman has been working as a television sportscaster for the Fox network.

Troy has gained significant fame and fortune in his career. He has also won several titles, making him one of the greatest players in the NFL. Because of his growing fame, people want to know about his personal life, especially his marital life. He has been married two times. So, who is his first wife, and where is she?

Met At A Practice Session

The former American Football quarterback, Troy Aikman, once shared a blissful marital life with Rhonda Worthey. The couple’s love story began in 1998 when they met for the first time. At that time, both of them were staffers at the Dallas Cowboys. She worked as a publicist at that time, and the duo had met during a Cowboys practice session.

The duo became friends, and within a short time, the pair began dating, and their relationship lasted for one and a half years. Then, the lovebirds decided to take their relationship to the next level and exchanged vows on April 8, 2000.

Close friends and families from the bride and groom side attended the wedding. And later, a much larger group attended the reception. The couple’s marital life was going great, and they welcomed two kids.

Worked For The Dallas Cowboys

As mentioned earlier, Rhonda Worthey met her former husband, Troy Aikman, during the practice facilities of the Dallas Cowboys. She worked as the publicist of the team. Furthermore, according to her Facebook description, she is the former public relations staffer at the Cowboys.

Moreover, Rhonda was speculated to be one of the stars of the reality television show Real Housewives of Dallas. But, the show kept pushing back, and the cast was not confirmed until February 2016. And she was not included among the cast members.

A year later, in July 2002, Rhonda and Troy welcomed their second baby girl, Alexa Marie Aikman, also known as Ally Aikman. The birth of Ally completed the family. Troy and Rhonda love their daughters and raised them with immense love and care.

While the former NFL player has two daughters, Troy Aikman’s ex-spouse, Rhonda, is the mother of three. Before getting married to Troy, she was in a relationship with someone whose identity has not been revealed till today. She has a daughter named Rachel Martin, whom she welcomed in 1991.

Troy and his daughters with Rhonda have a great bond with Rachel. Furthermore, they all grew up having a wonderful time together.

After being together for thirteen years and married for 11, Rhonda separated from Troy. On January 24, 2011, she and her former husband announced their separation. However, the reason behind their split has not been revealed yet.

While announcing the separation through a statement that The Dallas Morning News published, Rhonda’s ex-husband mentioned that it was a “difficult decision” for Rhonda and him. Three months later, on April 12, 2011, their divorce became final.

According to DailyMail, Troy paid her $1.75 million out of his $25 million fortune, which he had amassed after his football career ended in 2001. Similarly, Celebrity Net Worth, reports that he paid her $2 million cash for divorce settlement.

As per TMZ, Troy Aikman’s ex-wife, Rhonda, gave up her stake in the Aikman family mansion in Dallas in November 2010. But, it was not revealed if she got any compensation from there. They had listed their mansion for sale for an amount of $27 million in 2011. At that time, that became the most expensive home for sale in Texas. Even after lowering the price to $14 million, they could not find a buyer.

Furthermore, a few months before their separation, they were already divvying up family assets.

Similarly, a few months after their separation, Rhonda bought a home for $1.5 million in Dallas, where she resides currently. Furthermore, Rhonda Worthey’s net worth is estimated to be $10 million. On the other hand, her ex-husband, Troy, has a fortune worth $50 million to his name.

The ex-couple seems to have co-parented their kids as they were granted equal custody of their daughters. Furthermore, following the divorce, Troy got married to a fashion retailer, Catherine ‘Cappa’ Mooty.

It must have been difficult for Rhonda and her ex-husband after they ended their marriage of 11 years. A year after their divorce was finalized, in August 2012, Troy Aikman’s former spouse, Rhonda Aikman, was arrested and charged with public intoxication.

The police officers took her to Collin County Jail after she appeared to be drunk near Plano, Texas. Similarly, her car was towed to a pound. Furthermore, she was released the same day on a $269 bond. Worthey agreed to plead “no contest” to the charge in exchange for 30 days probation.

Apart from this small incident, Rhonda has stayed away from the spotlight. But looking through her Facebook page, it is clear that she is living a wonderful life with her kids. Nevertheless, we hope to learn more about Troy Aikman’s ex-wife in the coming days.