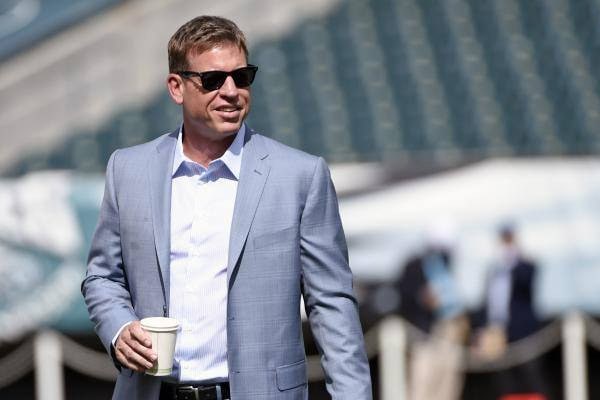 Troy Aikman amasses his net worth from his career as a sports commentator. Image Source: Facebook.

Troy Aikman, born Troy Kenneth Aikman, is a former American football player. The first overall pick of the 1989 NFL Draft, Aikman was a quarterback for the Dallas Cowboys. He played twelve consecutive seasons as the beginning quarterback with the Cowboys, the highest number of seasons by any cowboy quarterbacks to date. Currently, the Pro Football Hall of Fame 2008, Aikman, works as a sports analyst for the FOX network.

Through broadcasting, The Troy Aikman Foundation, and real estate, Aikman has been able to amass millions of dollars to his fortune. According to Celebrity Net Worth, Troy Aikman’s net worth is estimated at $50 million. Well, there are many sites which suggest that he has got more than that or less. But one thing is for sure that Troy has greatly amassed from his prolific career.

Nevertheless, please keep reading to know Troy Aikman’s earnings, which helped him garnish such a vast net worth.

Troy Aikman’s Earnings As A Sportscaster

After leaving the playing field, Troy became a full-time employee as a sports analyst on the FOX network in 2001. Within months of joining the FOX network as a sportscaster, Aikman became more likable in the broadcast table than he was on the field.

According to the Celebrity Net Worth, at the starting of a broadcasting career in the FOX network, Aikman earned just $1 million per year. However, by 2019 his annual salary as an analyst increased to $7.5 million, making him one of the highest-paid sports broadcasters. He might be receiving a similar payment in 2020 too.

There are multiple ventures which contribute to Troy Aikman’s net worth. Besides being a successful quarterback in the past, and current sports analyst in FOX, Troy Aikman is also an investor. He was a joint owner of the NASCAR Sprint Cup Series with his fellow former Cowboys QB Roger Staubach. Likewise, the partner and spokesman for IDLife, Aikman, was a minority owner of the San Diego Padres. He might have got some dollars as his shares from those teams, which added to his assets.

Furthermore, Troy did an endorsement deal with Wingstop, the restaurant chain, in 2003. Later, Roark Capital bought Wingstop and appointed Aikman in the board of directors in 2011. According to ABC News, in 2015, Aikman eventually sold an unrevealed stake of his shares in the chain. Although he did not disclose his total ownership in the company, he said it was worth more than what he grossed during his first four NFL seasons.

Troy Aikman amassed around $6 million in his first four NFL seasons. So, probably, his total holding in Wingstop was over $6 million.

Troy Aikman married twice in his lifetime. He married the former Cowboys publicist Rhonda Worthey in 2000 and eventually divorced in 2012. Aikman split his real estate assets with his ex-wife, Rhonda. Moreover, he also paid her a $2 million cash settlement.

A year before the official separation of Aikman with Worthey, he listed his long-time home in Highland Park, Texas, for $24 million in 2011. The Mediterranean-style Aikman’s mansion was built in 2005 on nearly 1.5 acres of land. It included five bedrooms and seven bathrooms. Also, it had a sports court, outdoor living center, library, and many other more facilities.

As Aikman did not find a buyer until 2012, he reduced the price to $14 million. Finally, in 2013, the chairman, president, and CEO of Primoris Services Corp, Brian Pratt, and his wife, Barbara Pratt, bought it.

After selling the Dallas-Area Mansion, Troy Aikman relocated down the street into another home in Highland Park, which he purchased in $4.6 million. His new property included five bedrooms, five full and half bathrooms, seven living areas, and a wine room on the first floor. Likewise, there is also a morning room with a fireplace. The Los Angeles Times reported that Aikman kept this house to sell at $5.3 million in 2014. However, it’s unknown if he got the buyer or not.

Currently, Troy Aikman is living with his wife, Catherine Mooty, and daughters Alexa Marie Aikman and Jordan Ashley Aikman, in another mansion in Texas. Aikman had bought his current residence in St. Johns from author/editor Jane Wolfe for $4.3 million in August 2013.

Once A Highest-Paid Player In NFL

Troy Aikman accumulated a lot of money during his career as an NFL quarterback. One time, he became the wealthiest player in NFL history, signing to a $50 million, 8-year contract with the Dallas Cowboys in 1993. It also made him the highest-paid player in the NFL at that time.

Troy Aikman’s net worth of $50 million has given him all the luxuries he deserves for his hard work. Besides spending some portion of his riches in his daily living, he often utilizes his fortune in charitable works as well.