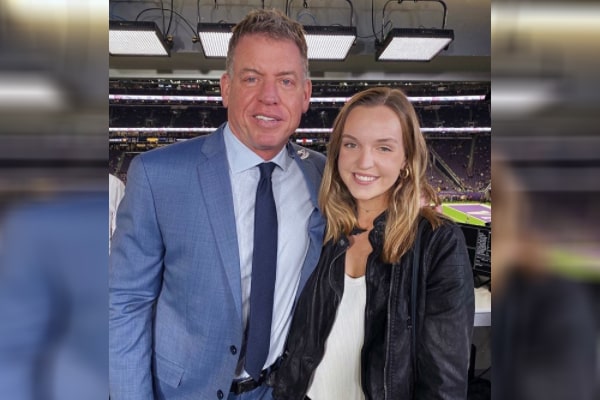 Troy Aikman is a former American professional football player, a quarterback for the Dallas Cowboys in the NFL. The first pick of the 1989 NFL Draft, Aikman was a six-time Pro Bowl selection and was the MVP of Super Bowl XXVII. Furthermore, Troy was elected to the Pro Football Hall of Fame in 2006.

Troy Aikman is working as a television sportscaster for the Fox network. Besides being a sports analyst, Troy is a doting father of two daughters with ex-wife, Rhonda Worthey. Hence, we will be tailing Troy Aikman’s daughter, Jordan Ashley Aikman.

Troy Aikman welcomed his first kid, Jordan Ashley Aikman, with ex-wife, Rhonda Worthey, on August 24, 2001. She was born a year after the former pair shared their vows in 2000.

Troy Aikman’s daughter, Jordan, often appears on his Instagram bearing cute caption. Furthermore, he claims that the birth of his first-born changed his life forever. Moreover, she grew up along with her baby sister, Alexa Marie Aikman, who is only a year younger than her and was born on July 30, 2002.

Aikman’s daughters share great sibling-bond and often are featured on one another’s Instagram. Likewise, they used to visit their pa during his games and cheer him. Unfortunately, Troy kept his lovely daughter’s childhood secluded from the media, but we can bet she had a fun childhood alongside her sister.

Moreover, Troy Aikman’s daughter, Jordan, also has a half-sister, Rachel Früm Frands, from her mother’s previous marriage. Jordan seems to be a friendly person with a bubbly personality and believes in spirituality and aura. Therefore, she has lots of friends and is active on social media.

Jordan Ashley Aikman, Troy Aikman’s first-born with ex-wife, Rhonda, is an adventurer. Judging by her Instagram, she loves to travel and adores adventure. From deserts to oceans to hills to mountains, she seems to have set foot on every landscape by 19.

Furthermore, even Jordan’s father acknowledged her thirst for adventure and prey’s that her thirst never gets quenched. Also, the freshly graduate of the Episcopal School of Dallas is a social bee.

Besides Jordan’s thirst for adventure, she also seems to be preparing for her higher studies. Aikman’s father proudly announced her acceptance to Washington & Lee University on Instagram in December 2019.

Troy Aikman’s daughter, Jordan, seems eternally grateful for her life and is living her fullest. She also shares her interest in sports like her father and sister. Let’s hope she does well in the Uni and make her dad the proudest.

The former couple met while Jordan Aikman’s mother worked as a publicist for the Cowboys, and Troy was starting his quarterback journey. Since then, sparks burst, and the pair were already walking down the aisle on April 8, 2000.

The Aikman couple were blessed with two beautiful daughters from their decade-long marriage, and they were happy together as a family. Unfortunately, things went downhill when the former pair announced their separation on January 24, 2011.

Jordan Aikman’s parents were finally divorced on April 12, 2011, when she was only ten. Since both Aikman’s daughters were underaged at the time, the former lovebirds must have agreed to joint custody and present on their kid’s life regardless of their failed marriage.

Even today, Rhonda and Jordan share an impeccable bond similar to her father. She further shared a couple of pictures with her mother on Instagram.

Jordan Aikman’s Father Has Moved On

Although Troy Aikman’s first marriage was a failure, he did not shy away from finding another love. He further announced his engagement to high-end fashion retailer, Catherine “Capa” Mooty in June 2017. Jordan’s father proposed his to-be wife at the time, on a romantic vacation in Italy.

Moreover, the pair shared their vows on September 2, 2017, at the Biltmore Four Seasons in Montecito, California. Both Aikman’s daughters were present in their father’s special day alongside their half-brothers from her stepmom’s side.

Jordan is close to her stepmother, Catherine as well, and spends quality time with her family. As of now, Troy Aikman’s daughter only cares about adventure and studies. Let’s hope she outshines her father in the coming days and excels in whatever she chooses to be.

The name Jordan is of Hebrew origin, which means to flow down, while Ashley means ‘from the ash tree’ and has English origin.