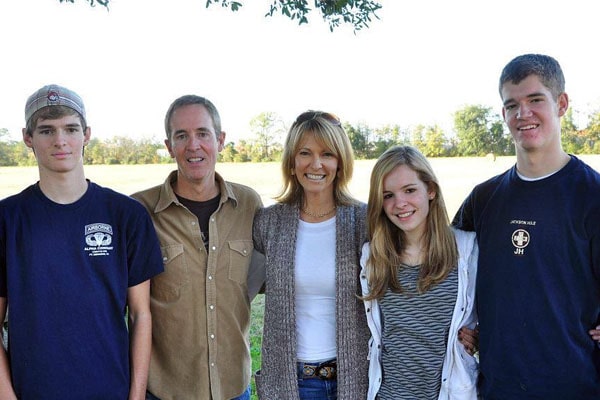 Andy Stanley is one of the most recognized Pastors of the United States. The Pastor Emeritus of First Baptist Church, Charles Stanley‘s son with Anna Stanley, Andy Stanley, is currently the senior pastor of Atlanta-based North Point Ministries. Each month millions of live audiences worldwide access his messages, YouTube videos, leadership videos, and podcasts via different channels. The journalism degree holder is also an author of over twenty books, including When Work & Family Collide and Next Generation Leader.

The 63-years old Andy Stanley is not just a communicator, pastor, and author, but also a proud dad to three grown-up kids with his wife of over three decades, Sandra Stanley. Along with his rising fame, many of his followers worldwide are curious to know about his kids as well. So, here, get to be familiar with all three of Andy Stanley’s children with Sandra Stanley.

The good-together couple, Andy Stanley and Sandra Stanley’s eldest child, is Andrew Stanley, who arrived some years after their marriage in 1988. Andy and Sandra homeschooled Andrew, and later, he earned a degree in finance. However, instead of getting engaged in finance-related jobs, Andrew chose to be in the field of comedy. Currently, the eldest Stanley sibling is pursuing his career as a comedian.

At the moment, Andy Stanley’s son, Andrew Stanley, tours around the nation as well as internationally, performing at festivals, clubs, churches, fundraisers, and many more. He never seems to be afraid of bringing his deeply rooted diffidence to the stage. According to his official site, he possesses a special perspective that pairs well with his dry delivery and observational nature.

Andrew Stanley is the grand prize winner of the 2017 Search for the South’s Funniest Accountant. Moreover, Montreal’s prestigious Just For Laughs Comedy Festival selected him as a New Face of Comedy in 2019. Also, he participated in the 2018 and 2019 Laughing Skull Comedy Festivals.

In 2020, due to the coronavirus pandemic, he usually did his standup comedy shows from his home via social networking handles. However, currently, he has resumed his performance in various venues around the United States. You can watch his comedy videos on his official website, his own YouTube channel, and other different social media platforms.

Another son of Andy Stanley with his partner, Sandra Stanley, is Garrett Stanley, who also chose a different career path than his dad. Currently, he is a successful Social Media Manager at Marketwake, a Digital Marketing Agency in the Atlanta Metropolitan Area.

Before joining Marketwake in 2020, Andy Stanley’s son, Garrett Stanley, served as a Sales and Marketing Director at Millennial Brands Inc. from February 2020 to October 2020. Also, he is the former Allstate Benefits Enrollment and Sales Manager of Allstate Benefits. Similarly, a graduate of Kennesaw State University with a degree in Communication-Public Relations, Garrett worked as a Sales Representative at Advantage Sport & Fitness.

Moreover, Garrett Stanley served as a Groups and Logistics LDP at North Point Ministries, Inc., founded by his parents in 1995. Though he does not currently serve in that position in the ministry, he still takes part in the ministry’s services along with his parents and siblings.

Furthermore, Garrett’s Instagram bio suggests that he is a health, fitness, and fashion enthusiast. He often shares pictures and videos of him in the gym, where he regularly attends ‘Onelife Fitness,’ Holly Springs,  with some fitness tips. Besides, he also seems to be a keen traveler and a golf player.

The youngest and only daughter of Andy Stanley with Sandra Stanley is Allison Stanley, who prefers to be near God. Allison seems to spend most of her time in her family’s North Point Ministries as its active member. The Auburn University graduate, Allison, recently completed her Master’s degree in Christian Leadership from Dallas Theological Seminary (DTS).

Andy Stanley’s daughter, Allison Stanley, also recognized as Allie Stanley, is passionate about serving younger generations. While at Auburn University, she was a student coordinator. Similarly, Allie was also a middle school small group leader and a camp counselor.

Allison Stanley often shares the stage with her famous dad and appears in some talk programs with her mom. Moreover, she also helps her mom and dad in the foster care home founded by their ministry and actively participates in Church services.

Andy Stanley and Sandra Stanley homeschooled their kids when they were young. When they grew up, all three of their children went to public high school. When their daughter, Allie, entered ninth grade, the Stanley family became a foster family to three girls. And, every one of their family members, including their three kids, had a heart for helping kids in hard places.

Andy Stanley’s daughter, Allie, assisted with child care and was a great influence for their girls in foster care. Though Sandra and Allie said the same things, the girls would actually listen more to Allie than Sandra. Moreover, their sons, Andrew and Garrett, helped drive kids to school and in other works.

The extra help from Allie, Garrett, and Andrew gave Andy and Sandra the needed margin to stay on top of parent visits, appointments, court dates, and caseworker visits. The Stanley couple is happy that their kids grew up to be like them. All three of their kids have a habit of saying no to certain opportunities so that they have more capacity for what really matters to them, just like their parents.

Andy Stanley’s Children Are In A Relationship

Similarly, Andy Stanley’s son, Andrew Stanley, is in a romantic relationship with Atlanta-based attorney Ana Moises. Going through their social media handles, they seem to be so much in love with each other. However, they are not tied in a marital bond yet. Probably, they are planning to get married soon.

Furthermore, the beautiful daughter of Andy Stanley and Sandra Stanley, Allie Stanley, is married to Clay Cooney. They walked down the aisle together amidst the coronavirus pandemic on 30 March 2020.

Nevertheless, all of Andy Stanley’s children are living a happy life with their better ones. Moreover, each of them is excelling on their chosen career paths. We wish all three of them all the best for their upcoming days.