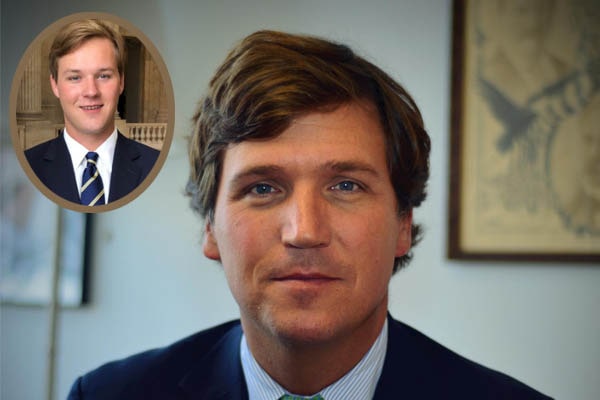 Tucker Carlson is the popular American political news correspondent, currently serving as the host of Fox News’ nightly political talk show Tucker Carlson Tonight. A vocal opponent of progression, Carlson was a commenter for CNN from 2000 to 2005 and co-hosted the network’s prime-time news debate program Crossfire. Later, Carlson hosted MSNBC’s nightly program, Tucker. Since 2009, he is regularly serving as a political analyst for Fox News.

The nationalist and paleoconservative Tucker Carlson is married to his high-school sweetheart, Susan Andrews Carlson, since 1991. Together, the long-time couple, Carlson and Andrews, have four grown-up kids, including their son, Buckley Carlson.

Here, meet Tucker Carlson’s son with Susan Andrews, Buckley Carlson, who is currently working at the U.S. House of Representatives.

Only Son Of Tucker Carlson With Susan Andrews

Buckley Carlson is the only son and second child of the infamous analyst, Tucker Carlson, and his wife, Susan Andrews. Carlson and Andrews welcomed their son, Buckley Carlson, in 1997. Buckley’s dad wanted to name him after Flashman, the title character of author George MacDonald Fraser‘s novel. But his mom, Susan, overruled him. So, his parents named him after his uncle, Buckley Carlson.

Buckley shares a great bonding with his sisters. Being the only brother of his sisters, he is overprotective of them. In 2018, when a Latino immigrant called one of his sisters C*** at the Farmington Country Club in Charlottesville, Virginia, Buckley threw wine at the man’s face. However, he and his dad, Tucker Carlson, claim that they did not assault the man. It shows that Buckley is always there to protect his sisters whenever they are in trouble.

In 2018, some left-wing activists targeted Buckley Carlson and his family’s home. He, his sisters, and his dad were out, and his mom was alone at home when the incident happened. Every one of them in his family was very upset by the protesters. Since then, he and his family members do their best to keep their home address and family life private. It might be the reason Tucker Carlson’s son, Buckley Carlson, rarely appears in public events with his celebrity dad.

Tucker Carlson’s kid, Buckley Carlson, is a 2019 graduate of the University of Virginia with a Bachelor of Arts in Government & Political Science. Currently, he serves as a full-time Communications Director at the U.S. House of Representatives. He first joined the U.S. Congress’s lower house in 2019 as a Special Assistant to U.S.Rep. Jim Banks, R-3rd. Before hiring Buckley, Banks did not know that he was the son of the Fox News host, Tucker Carlson. Buckley had not revealed his relationship with the political commentator at the time.

After working as an assistant to Jim Banks for seven months, Tucker Carlson’s son, Buckley Carlson, became full-time Press Secretary in January 2020 and then secured the position of Communications Director in January 2021. Before this, Buckley was a Policy Intern at Jeffrey J. Kimbell & Associates, Washington, D.C., from June 2018 to August 2018. He also served as a Communication Intern at The White House for three months while he was studying at the University of Virginia.

Currently, Buckley Carlson is living a blissful and happy life with his family in Washington, D.C. Though the Carlson family rarely appears together before paparazzi, they regularly go for family vacations making sure the media people stay far from their private life. Moreover, Buckley and his dad also often go to the wilderness for fishing as a refreshment from their hectic days at work.

Furthermore, Tucker Carlson’s child, Buckley Carlson, seems to prefer to stay far from the limelight. The 24-year-old boy is available on social networking handles but, all of his socials are private. Nevertheless, we wish the young man all the best for his future and hope he opens about his life in the coming days.

The boy name Buckley is of Old English origin, which means deer meadow.