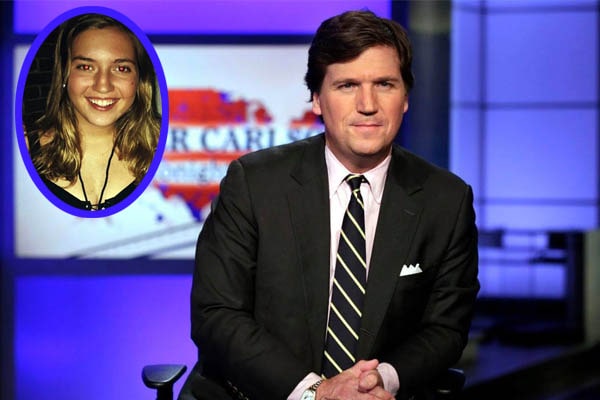 Hopie Carlson is one of the four kids of Tucker Carlson with his wife, Susan Andrews. Image Source: Social Media.

Tucker Carlson is a well-known television personality, currently serving as the host of FOX News’ nightly political talk show Tucker Carlson Tonight. The former print journalist Carlson was co-host of CNN”s prime-time news debate program Crossfire for four years, from 2001 to 2005. Apart from that, the famous American political commentator is also a writer of two books, Politicians, Partisans, and Parasites and Ship of Fools.

The conservative television host, Tucker Carlson, is married to his teenage love, Susan Andrews. Together the long-time couple has a son and three daughters. Here, know some more about one of Tucker Carlson’s daughters, Hopie Carlson.

Hopie Carlson is the third kid of the long-time couple Tucker and his wife, Susan Andrews Carlson. Susan gave birth to their child, Hopie, in 1999 in Virginia. Tucker Carlson’s daughter, Hopie Carlson, spent most of her childhood in Virginia, where she acquired her primary education. Later, with her entire family, she relocated to Washington DC.

Hopie has two elder siblings, a brother and a sister, and one younger sister. Her elder sister, Lillie Carlson, arrived in 1995 while her brother, Buckley Carlson, joined the family in 1997. Similarly, Hopie’s smaller sister, Dorothy Carlson, is the youngest one who was born in 2002.

Hopie Carlson’s parents, Tucker Carlson and Susan Andrews, took their wedding vows in 1991. They dated for five years before deciding to tie their marital knot.

Tucker Carlson and his beloved wife, Susan Andrews, obtained their secondary education from St. George’s School, Newport, Rhode Island. It is the place where Carlson and Andrews’ romance began to bud. Later, their beautiful daughter also attended the same school.

Tucker Carlson’s kid, Hopie Carlson, was the senior prefect of St. George School in 2017. She was her class’s president and used to lead the assembly twice a week. Moreover, according to some online sources, Hopie was on her school’s sports team. She took part in the 100 yards and 500 yards breaststroke event.

However, three years later, today, she might have already graduated from high school. Probably, Hopie is enrolled in some prestigious university at the moment and excelling at her studies.

Her Dad Is Strict About Her Dating Life

Like every dad, Hopie Carlson’s dad, Tucker Carlson, is undoubtedly concerned about his daughter’s life, especially when it comes to her personal life. He is concerned about Hopie and her sisters’ love life too. Probably, Tucker might be worried, thinking that his little girls might choose the wrong man as their date and life partner.

In 2019, while discussing the Canadian Prime Minister’s blackface scandal with Stephen LeDrew, Hopie Carlson’s celebrity father, Tucker Carlson, said that he would never allow his daughters, including Hopie, to date a feminist. He said so because he believes that feminists are all creep. So, he does not want his girls to be with creeps.

Hence, alarm bells went off pretty loud. So boys! If you are a feminist, then you dare not go near Hopie Carlson or even her family.

Furthermore, going through the Facebook profile of Hopie Carlson, she has mentioned that she is married to Clare Walker. Does it mean Tucker Carlson’s daughter, Hopie, is also a member of the LGBTQ+ community?

In 2018, Hopie Carlson’s father, Tucker accused a man of calling his then-teenage daughter a ‘wh*re.’ At the time, Hopie was the only girl in the family who was nineteen years old. So, probably, it was Hopie whom the man called offensive words. Reportedly, on 13 October 2018, Tucker Carlson’s daughter, Hopie Carlson, had dinner with her dad, one of her siblings, and some of her family friends at the Farmington Country Club in Charlottesville Virginia. Toward the end of the meal, she went to the bathroom with a friend.

On her way back, a middle-aged man sitting on the club’s bar stopped Hopie and questioned her if she was with Tucker Carlson. She had never seen the man before. Hopie replied to him, saying that Tucker is his dad by pointing at him. In response, the unknown man asked her if she was Tucker’s wh*re. He even said more harsh words to her.

After the incident, Hopie Carlson left the club, and later, her brother and her dad went into the bar to confront the man. The man admitted before them that he had called offensive words to their girl and again became profane. In response, Tucker Carlson’s son threw a glass of wine in the man’s face and told him to go away from the bar, which he immediately did. Later, the club also revoked the man’s membership.

Due to the incident, Tucker Carlson’s little girl, Hopie Carlson, came into the limelight. However, everything has cooled down, and now the young woman is enjoying her life away from the spotlight. Let’s hope we get to hear what Hopie is up to in the coming days.

The name Hopie is the derivative form of the English name ‘Hope,’ which means positive expectations.