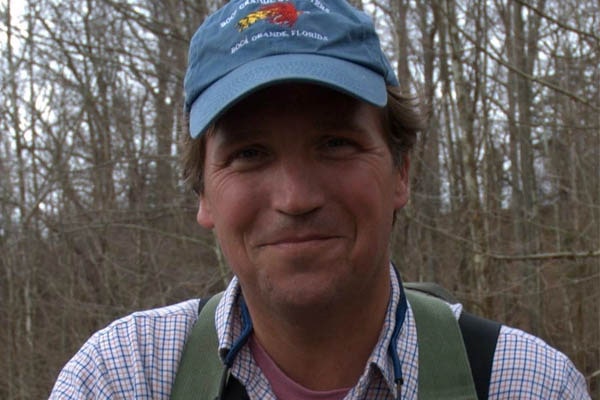 Tucker Swanson McNear Carlson, in short Tucker Carlson, is a famous American conservative T.V. host and political commentator. Since 2016, he is regularly hosting the FOX News’ nightly political talk show Tucker Carlson Tonight. Before this, Carlson was a CNN commenter from 2000 to 2005 and MSNBC’s host for the nightly program Tucker from 2005 to 2008. Besides, Tucker is also an author of two books, a political book titled ‘Ship of Fools‘ and a memoir titled ‘Politicians, Partisans, and Parasites.’

Almost every regular viewers of primetime television are familiar with Tucker Carlson’s professional endeavors. But, many are unfamiliar with his personal life, including his beautiful wife, Susan Andrews Carlson.

Here, be familiar with Tucker Carlson’s wife, Susan Andrews, who is always by his side despite numerous allegations laid upon him.

The exemplary husband-wife duo, Susan Andrews and Tucker Carlson know each other since their teenage days. Tucker Carlson’s partner, Susan, met her future husband while they were in tenth grade. Both attained their secondary education at St George’s School, Middletown, Rhode Island.

Speaking of their first meet with People in 2000, the on-air political commentator, Tucker Carlson, said that he found Susan probably the cutest tenth grader in entire America. In reply to her husband’s praise, Susan stated that when she first saw Tucker, there was a bounce when he walked in his khaki pants and ribbon belt. She added that she thought, even then, Tucker seemed so positive and optimistic. Since then, their affair began to bloom, and the now-married pair is together ever since.

In 1991, some months before graduating from Trinity College, Carlson gathered some courage to ask his then-girlfriend, Susan’s dad, Rev. George Andrews II, for her hand in marriage. They exchanged the wedding vows in August 1991 in the chapel of their former school, St. George School. Susan and Tucker honeymooned in Bermuda.

Mother To Four Children With Tucker

The marriage of Susan Andrews and Tucker Carlson has crossed over three decades now. Their togetherness as husband and wife has blessed them with four kids, including son Buckley Carlson and three daughters, Dorothy Carlson, Lillie Carlson, and Hopie Carlson. Lillie is their oldest child, while Dorothy is the youngest one.

Despite having a great name as a television personality, both Tucker and his wife, Susan, do not share much about their kids in public. It seems like the pair intends to keep their personal life as far as possible from the media attention. Well, it could be the way to shield their family life from any public backlash they may receive. As of now, the Carlson family resides blissfully in Washington DC.

Aforementioned, Tucker and his wife, Susan Andrews knew each other since their teenage days. Moreover, Susan Andrews’ dad, Rev. George Andrews, was a headmaster at their school. So, Tucker had a good relationship with his in-laws since his teenage days. When Tucker struggled to continue his further studies, Susan’s father assisted him in enrolling at Trinity College, Hartford.

We are live from El Salvador. We just finished sitting down with President Bukele for our new Tucker Carlson Originals series coming soon to Fox Nation. There were also many newsworthy moments we’ll share tonight at 8pm ET on Fox News. pic.twitter.com/YMv7nZFdEL

Furthermore, after Susan and Tucker tied their marital knot, they went through several tougher times. In 2001, Carlson became almost depressed and felt stranded after losing his job in New Jersey. However, Tucker Carlson’s wife, Susan Andrews, never gave up on him and maintained her faith in him. Eventually, the entire family of Susan and Tucker relocated from New Jersey to Washington DC.

Moreover, Tucker Carlson’s spouse, Susan Andrews, led him to take faith seriously. Both Andrews and Carlson are Episcopalians, and the latter adores the liturgy, though he abhors the ones who run the denomination.

Susan Was Home Alone When Protesters Targeted Their Home In 2018

In 2018, host Tucker Carlson was at his office while his wife, Susan Andrews, was at home alone doing her chores. Their four kids were also out of home at the time. Suddenly, Carlson began receiving strings of text messages hinting there was some tumult happening at his home.

Tucker Carlson immediately called his wife. She was in the kitchen alone preparing dinner, and she heard thumping on the door and screaming. Someone started pushing their front door and actually cracked it. Thinking it was a home invasion, Tucker Carlson’s wife, Susan Andrews, locked herself in the pantry and dialed 911. However, it came up to be a protest rather than a home invasion.

Roughly 20 people from an organization named Smash Racism D.C. called Carlson racist and accused him of promoting hate. They even threatened him from outside his home, though Carlson was not there.

Ever since then, Tucker and Susan went to great lengths to maintain their home address private as their whole family was distraught by the protestors. It might also be the reason why Susan and her kids with Tucker do not seem to have much of a social media presence.