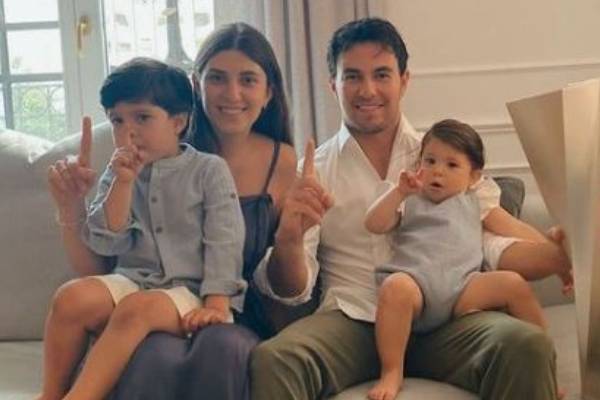 Checo Pérez, aka Sergio Pérez, made his home crowd proud after finishing P3 in the November 9 race in Mexico. And with the overwhelming support he has received in his native country, Pérez’s personal life has also attracted many fans.

Most of Checo’s supports are well aware of his marriage to Carola Martínez and his two kids. So, today let’s take a look at Sergio Pérez’s daughter, Carlota Pérez Martínez, and learn more about the young one.

Youngest Kid Of Sergio and Carola

Aforementioned, Sergio Pérez and his wife Carola Martínez are blessed with two little ones in their relationship. And among the two, their daughter, Carlota Pérez Martínez, is the youngest. Checo’s baby girl was born on September 15, 2019, and the family announced her birth via an Instagram post.

Before Carlota, Sergio and Carola had already welcomed their son, Sergio Pérez Jr., to the family. Sergio Jr. was born on December 21, 2017, only a few months before his mom and dad tied the knot. Moreover, Carlota Pérez Martínez’s parents were blessed by Pope Francis on their wedding day.

Sergio Pérez’s Daughter Is Being Raised Away From The Spotlight

While we might know a few details about the Mexican F1 racer’s personal life, he has opted to keep much of it private. Moreover, the Pérez couple is raising their daughter away from the limelight. So, apart from her birthday and name, facts about the little one are not available for public viewing.

Furthermore, Sergio Pérez’s baby girl is not a regular face in either his or his wife’s social media pages. Checo only shares his family’s pictures once in a while. On the other hand, Carola also chooses to keep her babies away from her profile.

The privacy-loving duo, Sergio and Carola, have done a great job keeping their daughter hidden from the media. But we hope that we will get to see and hear more about Sergio Pérez’s daughter in the coming days.

The Pérez family has racing blood coursing through their vein as Carlota Pérez Martínez’s dad, Sergio, and grandfather, Antonio Pérez Garibay have both raced many times. Checo is the 5th F1 driver from Mexico, so it is no surprise that the family is obsessed with the sport.

Carlota’s big brother, Sergio Pérez Jr., is often seen attending various races that their father participates in. The little one is accompanied by his mother and is always supporting Pérez. Moreover, he was among the roaring crowd when Checo finished in P3 in the F1 Mexican GP after Max Verstappen and Lewis Hamilton.

Also, a picture of Carlota Pérez Martínez’s brother, Sergio watching their dad lifting his trophy has captured everyone’s heart. And while Sergio Jr. is a regular at the F1 races, we hope that Carlota is less present in the paddock.

It is understandable because Sergio Pérez’s daughter is still young. But we hope that Carlota Pérez Martínez will also be a regular at the F1 events, and we see her cheering for her dad in the upcoming F1 races.

Carlota is a female name of Spanish origin that means “free man.”