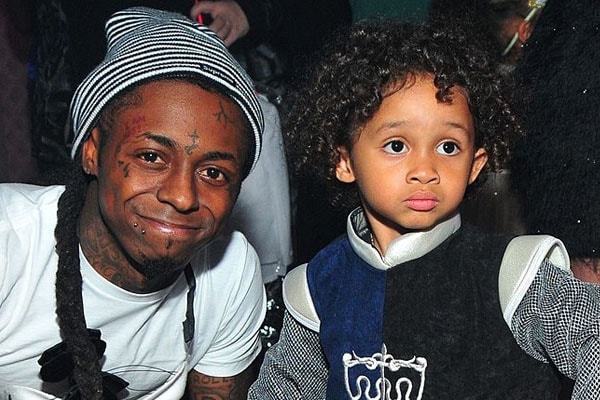 At first, the name of Dwayne Carter III’s mother wasn’t disclosed; it was only later on that her name got revealed. Dwayne Michael Carter III has got three half-siblings from his father’s side. He has an elder half-sister named Reginae Carter, Lil Wayne’s daughter with ex-wife Antonia Wright.

He has two younger half-brothers named Neal Carter and Cameron Carter, Lil Wayne’s son with ex-girlfriend Nivea and baby mama Lauren London respectively. And as for his mother’s side, Dwayne has got a sister named Essence Vivan, Sarah Vivan’s daughter.

The little Dwyane is already following the footsteps of his father, Lil Wayne. Just a few months ago, a fan-based account of Lil Wayne uploaded a video of his sons Dwayne, Neal, and Cameron creating their music video of Chris Brown‘s song “Loyal” featuring Lil Wayne and Tyga. And we must admit though, all of Lil Wayne’s sons did an excellent job for their age.

Who knows in the coming days, the little Dwayne Carter might also grow up to be a great rapper like his father, Lil Wayne. Apart from rapping like his father, Dwayne also loves skating like Wayne. The father-son duo surely has got a lot of things in common.

Similarly, the father-son duo also loves skating. Lil Wayne and his son, Dwayne, were spotted skating in Atalanta in 2016. They were practicing new tricks on a skateboard.

Lil Wayne’s son is just like his dad and could follow his footsteps in the coming years. Well, we can see that Dywane Michael is the mini-version of Lil Wayne and has a great relationship with his dad.

One thing is sure, Lil Wayne loves all the four children of his equally. On the auspicious occasion of Dwayne Carter’s 10th birthday, his father Lil Wayne celebrated it with a soccer-themed party as Dwayne is a big fan of soccer.

Lil Wayne’s handsome son, Dwayne, not only got a delicious cake, but he also got a chance to play ball with the goalkeeper Brad Guzan at the Mercedes-Benz Stadium. Having a celebrity parent is definitely an advantage, isn’t it?

Along with that, he is most probably living a lavish and splendid life since Lil Wayne has a staggering net worth of $150 million. Lil Wayne must be doing everything he can just to see a priceless smile on Dwayne’s face.

Living With His Mom

According to Heavy, Lil Wayne’s son, Dwayne, was living with his mom and half-sister, Essence, in 2018. He is most probably still with his mom since his dad has busy schedules most of the time. Perhaps Sarah is taking good care of both of her children.

Lil Wayne seems to visit his son frequently to have excellent bonding time with his son. Therefore, Dwayne’s relationship with his dad, as well as mom, looks to be fine.

The name Dwayne is the anglicized form of Dubhán, which means a little dark one. And as for the name Michael, it is derived from the Hebrew word mīkhā’ē’l, which means ‘Who is like God?.