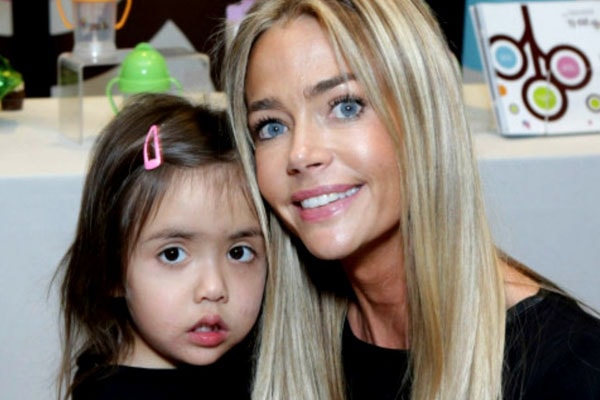 Denise Richards‘ third daughter Eloise Joni Richards was adopted by Richards in 2011 when she was a baby. The baby’s mother died of cancer after giving birth to her. Eloise suffered from the deletion of Chromosome, and it was a tough journey for both Richards and her child.

Eloise has two half-sisters named Lola Rose Sheen and Sam Sheen with whom she shares a close relationship. Denise is married to Aaron Phypers with whom the little Eloise Joni is very close.

The arrival of Eloise Joni has brought much happiness and blessings in Denise’s life because of which she never stops flaunting about her daughter on social media. When Eloise was a baby, no one had any idea that she was suffering from mental and physical deficiencies. She was unable to walk till she reached two and it took almost ten months for her to crawl.

She was sent to physiotherapy which improved her condition much better. However, Richards shared that sometimes she acts like a small baby and can’t walk properly. Eloise suffered from the rare chromosomal condition which resulted in developmental delays because of which she couldn’t reach the same peak as other toddlers.

However, Eloise isn’t the one to live with her weakness. She passed her preschool in 2015 and is currently indulging in many outdoor activities with her sisters.

Despite the fact, Eloise is a lovely girl who likes to get involved in everything. She loves baking, putting on make-up, ride a horse and she likes to watch TV with mama before going to sleep. Not only that, Eloise has to ride a night rider before a good night sleep. And one thing you wouldn’t miss to witness in Richards’ house is the dogs which Eloise loves utterly. As stated earlier, Eloise Joni is the adopted daughter of Denise Richards. And just like Denise, actress Charlize Theron also has got adopted children.

There is no detail about Eloise whereabouts, but Richards has shared some fantastic photos of Eloise with her sisters which gave us a golden chance to know that she is growing up well and is beautiful.

Richards is a single mother of three beautiful daughters. Even though it is challenging to parent them, these kids give her the strength which she considers as the best gift of her life.

Eloise came from the old French name Heloise. It means ‘Hale and healthy”. Joni is the feminine variation of John meaning God is gracious.