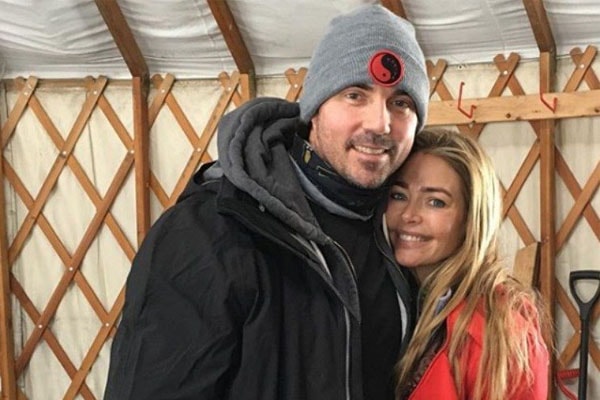 Denise Richards’ husband Aaron Phypers aka Aaron Cameron is an American actor. The couple of Denise Richards and Aaron Phypers married on Sept.8 2018 in Malibu beach as per Aaron’s request because eight signifies the infinity. They wanted their relationship to be endless and that day was meant to be their beginning.

Aaron was previously married to Nicollette Sheridan with whom he had gained much attention from the media. And now, his marriage to Denise has caused the major focus in the media limelight.

Ever since the couple officially announced their wedding on media, they have been cordially sharing about their plan and whereabouts. In Malibu, all three daughters of Denise joined them on the wedding day. They seemed to be proud of their mother to have someone in her life with whom she can share her joys and sorrows.

Aaron has already built the cordial relationship with Denise’s daughters especially with the youngest daughter Eloise Joni Richards. She likes to spend time with her step-father Aaron and Denise once shared that both admire each other’s presence. Not just Eloise, both of Denise Richards’ daughters, Lola Rose Sheen, and Sam Sheen, also share a nice bond with their step-father.

The 46-years-old, Aaron loves his partner boundlessly as we can witness them on Denise’s Instagram. In every glance, the couple can be seen hugging and kissing which looked as if they have just started loving each other. On March 19th, Aaron’s birthday, Denise surprised her husband with an awesome bike.

Aaron Cameron Couldn’t Gain Much Success As An Actor

Beside his recognition as the husband of Denise Richards, Aaron has also put his effort into becoming an actor. He has played a role in the documentary series ‘Air Emergency.’ In 2011, he starred in the short horror-comedy film ‘The Leap.’ As of now, there isn’t any news about his film projects. There is a rumor that Aaron Phypers will appear in the upcoming season of  ‘The Real Housewives of Beverly Hills’ in which Denise Richards has a plan to join.

For the time being, Denise Richards is enjoying her happily married life with husband Aaron Phypers.