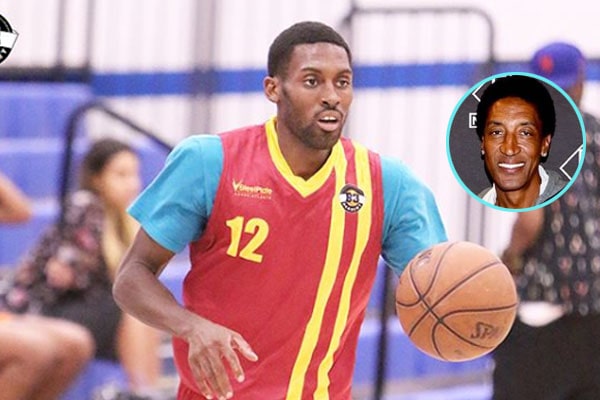 The NBA Hall of Famer, Scottie Pippen, got married to Karen McCollum in 1988  prior to dating for three years. Scottie was blessed with his first child, a son named Antron Pippen on December 29, 1987, with then-wife Karen. However, the ex-pair parted ways in 1990 after being married for two years. After that, Karen McCollum seems to have been single, and Scottie became the father of the other six kids and got in a relationship with Sonya Roby, engaged Yvette DeLeone, and married Larsa Younan, with whom he split in 2016.

Antron Pippen’s father, Scottie Pippen, is a legendary basketball player who played alongside Michael Jordan and won six NBA championships for Chicago Bulls. Antron’s father, Scottie, is also the NBA hall of Famer.  Antron is not an NBA player like his father, but he is one of the good players of NCCA.

Antron was born when his father Scottie was on the winning streak and on top of the career. Maybe that view of success and sports enthusiasm got transferred to Antron, making him choose a career in basketball.

Close With His Mother

Antron’s mother, Karen McCollum Pippen, is an entrepreneur and a musician. After her separation with ex-husband Scottie Pippen in 1990, she still seems to be single and just focusing on her son and preachings. We can assume that after the divorce, Antron grew up with his mother full of love and care.

We can see that the mother and son duo has a very special bond and spends a lot of time together. Looking closer, we can even see the resemblance between Antron and his mother Karen’s smile.

Antron Pippen is the first child of Scottie, and he’s not the only one as well. He has many half-siblings from his father, Scottie Pippen’s relationships, sister Taylor Pippen from the relationship with Sonya Roby, sister Sierra Pippen from ex-fiance Yvette DeLeone, and brothers Scotty Pippen Jr., Preston Pippen, Justin Pippen and sister Sophia Pippen from second ex-wife Larsa Younan.  All of his half-siblings except sister Sierra are bounded with sports.

However, it looks like Antron is not close to his half-siblings nor spend time with them. Maybe it happened because of the problematic relationship web created by father Scottie. For now, we know that Antron seems to have spent time with his half-sibling Taylor Pippen after looking at Antron’s mother’s Instagram post.

The NCCA basketball player Antron Pippen lives a very low profile life despite being an active sportsperson and also belonging to the famous Pippen clan. He does not seem to like to post about his private life on Instagram either.

We hope that Antron Pippen is living his life with happiness and peace. We also wish that he is close to his father because family should always stay together.

The Chicago Hall of Famer, Scottie Pippen, lost his oldest son at age 33 because of unknown reasons. Scottie announced the death of his firstborn via his social media.

Scottie did not disclose the reason behind his son’s early demise and candidly reminisced their countless conversations. Pippens also wrote that he & his kid shared several dreams, and he believed Antron would have been the finest in the team if he did not have chronic asthma.

I’m heartbroken to share that yesterday, I said goodbye to my firstborn son Antron. The two of us shared a love for basketball and we had countless conversations about the game. (1/3) pic.twitter.com/Zt3wo8wpcg

I’m heartbroken to share that yesterday, I said goodbye to my firstborn son Antron. The two of us shared a love for basketball and we had countless conversations about the game. (1/3) pic.twitter.com/Zt3wo8wpcg

Moreover, the basketball legend also asked his fans to keep his ex-wife and Antron’s mother, Karen McCollum, in their prayers. It must have been the hardest goodbye Scottie had ever bid.