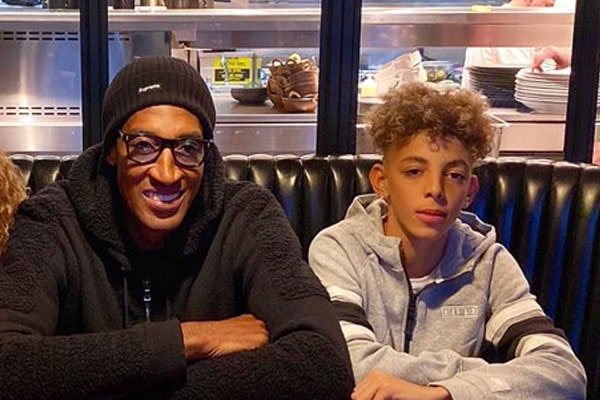 The former Chicago Bulls’ player, Scottie Pippen, got married to reality TV star Larsa Younan in 1997 and got split in 2016. In those nineteen years together in marital relationship, they were blessed with four kids of their own, three sons named Scotty Pippen Jr., Preston Pippen, and Justin Pippen and a daughter Sophia Pippen. Even before the marriage of Scottie and Larsa, Scottie was already the father of three other kids, daughters Taylor Pippen and Sierra Pippen, and a son named Antron Pippen from his past relationships.

As for now, let’s know more about the youngest son of the Pippen clan, Scottie Pippen’s Son Justin Pippen.

Justin Pippen was born on July 12, 2005, to the legendary basketball player Scottie Pippen and Kardashian clans BFF Larsa Younan. And being a son of such fantastic sportsman, Justin shows excellent sportsmanship. Justin shares many shots of his practices and matches on his Instagram, which has around 26.6K followers. Well, Justin is an Instagram star and a promising basketball player as well.

We can tell that Justin gets training and tips from his father, Scottie Pippen, looking at the skills he has at such a young age. Maybe he is dreaming of being a sportsman like his father Scottie and big brother Scooty Pippen Jr. Who knows?

Love watching JP learn, develop and grow—he definitely reminds me of myself at a young age. Hungry and always ready! pic.twitter.com/XiE7vBCdRW

It seems like Scottie Pippen’s son Justin is taking basketball seriously as seeing his growth as a player. Even his father Scottie said in his tweet that he thinks Justin is like his younger self, who is always hungry for learning and ready to grow as a player. Probably, Justin will carry on his father’s legacy of twenty years of basketball career.

Justin Pippen is a member of the family full of talents and popularity. His parents, father Scottie Pippen and Larsa Younan had announced their split in 2016 but still remain great parents for the better connection of the family. Looking at the enormous influence Scottie and Larsa have over their bank balance; we can assume that the whole Pippen family goes on luxury vacations.

Justin is very close with his parents and siblings as well. Being one of the youngest siblings, he is well pampered by his older brothers, Scotty and Preston. Also, Justin’s mother Larsa, tells all over her social media that he is inseparable from his sister Sophia Pippen, with whom he appeared on the True faces Of The World campaign.

We hope that Justin Pippen will grow up to be a great sports icon like his father, Scottie Pippen. We wish Justin all the best wishes for the future.

Justin shared his love for basketball with his half-brother, Antron Pippen who passed away in April 2021. Their father, Scottie Pippen announced the news in a form of a digital tribute where he promised to meet his son on the other side, soon.

Furthermore, the Chicago Bull’s Hall of Famer did not disclose the reason behind Antron Pippen’s death but he did mention his chronic asthma. Moreover, the Pippen family must be devastated by the sudden news but let’s hope they accept and celebrate his life instead. Both the Pippen family and Antron’s mother, Karen are in our thoughts.

The name Justin is of Latin origin, meaning “just,” “fair,” or “righteous.”