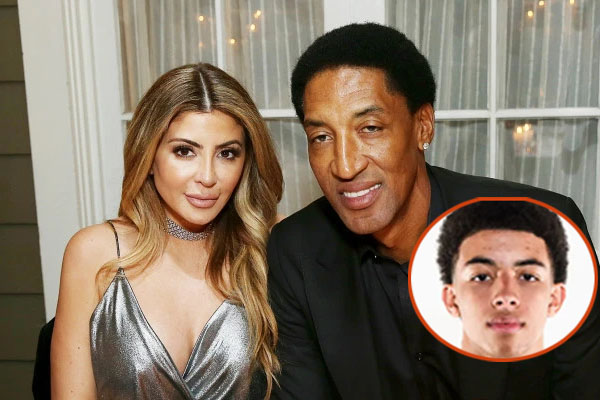 Scottie Pippen‘s son Scotty Pippen Jr was born on November 10, 2000, in Florida, United States. Scotty Jr is the only son of former seven-time NBA All-star Scottie and his ex-wife, Larsa Younan. Scotty’s mother Larsa is an American TV Star who has starred in ‘The Real Housewives of Miami.’

Scotty is a high school kid who plays basketball for his high school. Recently, he has made his college choice and is heading to Tennessee where he will join the Vanderbilt Commodores. Scotty announced the news himself via his Twitter account.

The father-son duo has a lot in common when it comes to sports and both of them are very much passionate about it. It looks like Scotty is very close to his father Scottie as he has been following his father’s footsteps.

Who knows that his father Scottie could have given him special tips and tricks to be a great basketball player. Alongside playing basketball, Scotty Jr also loves to travel and share each moment with his father.

By looking at Scotty’s basketball playing skills and games, we can assume that he could reach his father’s fame in the coming days.

Scottie Pippen’s Son Scotty Jr Is Close To His Family

Scotty also seems to be close to his siblings. Looking at his Instagram account ‘spippenjr,’ he seems to be enjoying and spending quality times with them. As of now, Scotty and his siblings are happily living together with their parents.

Scotty seems to be quite private about his personal life as he doesn’t like to disclose his personal matters in social media. Scotty often posts photos of him with his family. As Scotty is just in the starting phase of his career, he is rather focusing on his career than other activities. Despite being the child of a famous athlete, he prefers a lowkey life.

Scotty lost his oldest half-sibling, Antron Pippen at age 33. Their father ,Scottie announced the sad news via social media promising to meet again soon without disclosing the reason behind Antron’s unfortunate death. He further asked his fans and followers to keep his ex-wife and baby mama, Karen in their prayers.

The name Scotty is of Scottish origin, meaning From Scotland; a Gael.