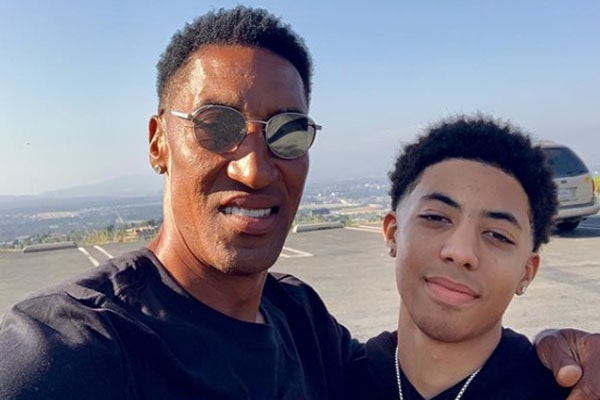 The legendary Chicago Bulls’ player Scottie Pippen was married to Larsa Younan, a reality TV star who is best friends with famous Kardashian clan since 1997 and filed for a divorce in 2016. In those nineteen years together, Scottie had four kids with his wife Larsa; three sons named Scotty Pippen Jr., Preston Pippen and, Justin Pippen and a daughter named Sophia Pippen. And he has daughters Sierra Pippen and Taylor Pippen, and son Antron Pippen from his previous relationship.

However, today we are talking about Scottie Pippen’s Son Preston Pippen, who was born on August 26, 2002.

Preston Pippen’s father, Scottie Pippen is a legendary basketball player who played alongside Michael Jordan as Chicago Bulls’ players. And Preston plays basketball for his high school, Sierra Canyon HIghschool, which is not an odd thing at all. We can say that Scottie’s athlete genes have been transferred to all his kids.

Well, Preston must get private training from his father, Scottie. We can guess that during the time of playing together, the father and son duo get plenty of time to bond with each other. And maybe who knows, Preston is training very hard to pursue a career in sports like his father and elder brother Scotty Pippen Jr.

Preston is not only an athletic boy, following his father’s footsteps, but also has a fantastic piano skill. Preston plays pieces of Beethoven and other classical musicians in his piano. And Preston has made his mother Larsa Pippen awe with his talents. Preston is an all-rounder person, and his mother, Laura, shares all of his abilities and achievements in her Instagram.

Looking at such vast talent that Preston possesses, it makes us wonder what he will pursue in the future. We only can give best wishes to Preston on the wilderness of finding a solid dream and career.

Preston Pippen has a huge family consisting of famous parents, Scottie Pippen and Larsa Pippen, siblings, brothers Scotty Pippen Jr. and Justin Pippen, and a little sister Sophie Pippen. He has other half-siblings from his father Scottie’s past relationships, sisters Taylor Pippen and Sierra Pippen, and a brother Antron Pippen. Preston even appeared in the film ‘Midgets Vs. Mascots‘ with his family members.

Preston spends a lot of time together not only with his family but also with his friends. Scrolling through his Instagram we can see that Preston is very sociable as well. He grew up well with full of talents, so we hope that Preston will find his way to great success and happiness.

Alike Preston, his oldest half-siblings, Antron also had massive love for basketball. However, he was taken away from the universe pretty soon, in April 2021. Their father, Scottie Pippen announced the death of his eldest child, Antron Pippen’s death via social media promising to meet him soon.

Papa Pippen also asked his fans and followers to keep his ex-wife and baby mama, Karen to keep in their prayers as she lost her child. Let’s hope the deceased soul rests in peace while the bereaved family finds solce in their memories.

The name Preston is of English origin, meaning “priest’s estate.”