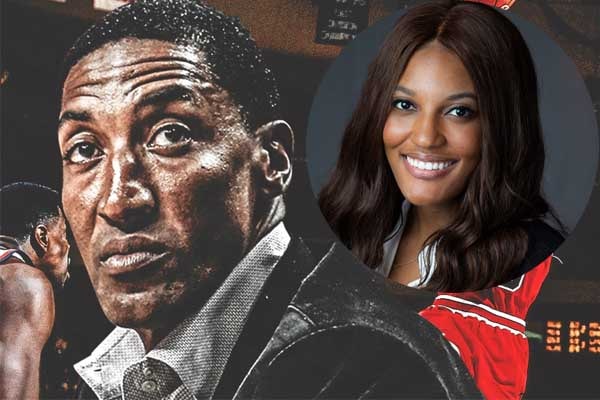 Born as Scotty Maurice Pippen, Scottie is an American former NBA who played 17 seasons of NBA and won six of them. His first marriage was with Karen McCollum, with whom he had a son named Antron Pippen. Scottie has fathered eight children from four women, Karen, Larsa Younan, Sonya Roby, and Yvette De Leon.

Among the eight kids of Scottie, let’s learn about Taylor Pippen. She is the daughter of Scottie and his ex-girlfriend, Sonya. Taylor Pippen was born on July 20, 1994, and unlike her dad, Taylor is more into volleyball than basketball. In fact, she is a professional volleyball player. That said, let’s know more about Scottie Pippen‘s daughter Taylor Pippen.

Taylor graduated with a Bachelor’s degree in accounting from Southern Illinois University. She is also a Minor in Marketing. She changed from marketing to accounting because she really liked it and decided that’s what she wanted to do. Her volleyball career also started while she was studying at the SIUC. While she was there, Taylor was also a member of the student-athlete advisory committee, and member of the Special Olympics organization, SIU peer mentor.

Furthermore, in an interview, Scottie Pippen’s daughter Taylor Pippen said she always liked volleyball. It has been a huge part of her life, and she thinks it would help her show her qualities like leadership, time management, and teamwork in the upcoming future. Speaking of her volleyball career, Taylor has a really impressive track record. To find out more about her statistics, visit the official page of SIUC. She continued her volleyball career even after graduation and joined the Club Voleibol Haris.

After graduating from SIUC, Taylor Pippen joined the  710 book store as a marketing intern, but before that, she worked at the Finish Line as a sales representative. Currently, she holds the position of Commercial Banking Officer at the Wintrust Commercial Banking.

Scottie Pippen’s daughter Taylor Pippen joined the bank in July of 2016 as a Credit Analyst and worked her way up to Commercial Underwriter. Within a span of a year, she was promoted as the Commercial Banking Officer. She has shown with hard work and determination, one can achieve anything in life.

Taylor Pippen is an adventurous girl, she loves doing new things and visiting new places. She also loves hanging out with her fellow mates and family members. You can see her surfing, sky diving, or simply chilling with her friends whenever she is free. She just adores having a couple of chats and drinks with her friends.

In addition to that, Taylor also shares a beautiful relationship with her family, especially her mother. She says her mother is the most important person in her life, and without her, she would be nothing. When speaking of her family we can only assume she shares a lovely relationship with all of her half-siblings. Well, she has a lot of siblings, to be exact she has six of them. As already pointed out Scottie has eight children with four women. Taylor’s half-siblings are Scotty Pippen Jr., Sierra Pippen, Sophia Pippen, Justin Pippen, Preston Pippen, Antron Pippen, and Tyler Roby Pippen.

About Taylor Pippen’s boyfriend, well, she has not revealed anything regarding her love life, and until she does, it will remain a mystery. Moving on, Taylor herself is not a mother but she is the god-mother of Dayo’s son. She says she is really close to her god-son and is obsessed with him. She loves carrying him around and adores spending time with him.

She is living her life as comfortable as she can, with everything she needs already with her, and we doubt her life could get any better.

Sadly, Pippen did not disclose the reason behind Antron Pippen’s death but mentioned his son had chronic asthma. Well, death is inevitable. Thus, we hope the bereaved family finds solace in his memories while Antron rests easy.