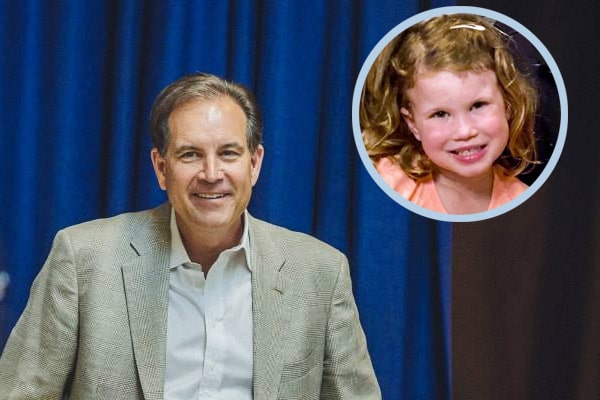 The Emmy Award winner sportscaster, Jim Nantz, is one of the most renowned personalities in the American Broadcasting Industry. During his career as a sports analyst, he worked on the NFL’s telecasts, NCAA Division I men’s basketball, and the NBA. Also, Nantz served in PGA Tour for CBS Sports. Besides being a broadcaster, Jim Nantz is also an author and an entrepreneur.

Despite having a booming professional career, Jim Nantz’s personal life is like a rollercoaster, with many ups and downs. Nantz married twice in his lifetime and is a proud father to three beautiful kids. Here, meet Finley Cathleen Nantz, Jim Nantz’s daughter with his current wife, Courtney Richards.

The sports commentator Jim Nantz met Courtney Richards for the first time at IMG, where Richards served as a vice-president. Constant meetings made them fall for each other and they began dating. After years of staying in a romantic relationship, Nantz proposed his girl with an engagement ring in 2010. After getting engaged for almost two years, the couple took their wedding vows on 9 June 2012 at Pebble Beach, California.

The husband-wife duo, Jim and Courtney, added more colors in their colorful and happy married life by welcoming their first child together, Finley Cathleen Nantz. Richards gave birth to Finley on 14 March 2014. However, Finley’s parents have kept their daughter’s daily life entirely away from the public’s eyes. There are not many photos of Jim Nantz’s daughter available for the public view.

As mentioned earlier, Finley’s dad has been married twice. Her mom is Jim’s second wife. Before getting hitched with Finley’s mom, Jim was in a marital relationship with Ann-Lorraine ‘Lorrie’ Carlsen since 1983. However, various marital issues like misunderstandings and lack of interest on one another created cracks in their bonding. As a result, Jim and Ann ended their marriage with a divorce in 2009.

During the togetherness of Jim and Ann, they gave birth to a daughter, Caroline Nantz. The oldest child of Jim and Finley’s half-sister, Caroline, seems to be following their father’s footsteps in the sports broadcasting. Currently, Jim Nantz’s daughter works as a Production Assistant at CBS Studio. Before, Caroline was an intern at NBC, CBS News, and Late Night with Seth Meyers.

Although Caroline and Finley are from different mothers, they share an outstanding bond. Caroline visits their Pebble Beach home often to meet her little sister, and both enjoy spending time together.

Jim Nantz is a famous figure of the American Entertainment Industry. He often attends various public events and is familiar with the bright limelight. However, Nantz rarely brings his daughter, Finley, and other family members in front of the camera. Jim Nantz’s daughter does not attend the red carpet events with her celebrity dad.

Moreover, Jim Nantz and his wife do not seem to be active in any social networking handles. Probably, the secretive parents of Finley want her to live a life away from the paparazzi. It looks like they ought to keep Finley far from the unnecessary media dramas which might affect her childhood.

Nevertheless, Jim and Courtney are raising their gorgeous little princess, Finley, so well. Though Finley’s concerned parents hesitate to show her off before the media, they probably are doing their best to give her a great childhood.