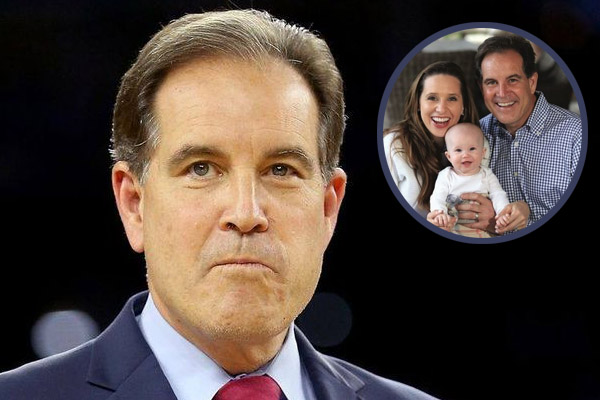 Almost every sports lover recognizes the CBS sportscaster, Jim Nantz, born James William Nantz III. Nantz worked on the telecast of the NFL, NCAA Division I men’s basketball, and the PGA Tour for CBS Sports as an American sports commentator. Besides, Jim Nantz is also an author and a co-partner of a wine company ‘The Calling.’

The well-known American Entertainment personality, Jim Nantz has been married twice. His first marriage was with Ann-Lorraine Carlsen Nantz, and currently, he is married to Courtney Richards. Moreover, he is a father to three kids, two from his current wife and one from the previous marriage. Here, meet Jim Nantz’s son, Jameson Nantz, with wife Courtney Richards.

Youngest Son Of Jim And Courtney Together

The CBS sportscaster Jim Nantz took the wedding vows with his long-time partner, Courtney  Richards, in 2012.  Since then, the contended couple is enjoying their happy marital life in their Pebble Beach mansion with their two adorable kids.

Jim and his wife Richards welcomed their first child together, daughter Finley Cathleen Nantz in 2014. Similarly, they gave birth to their youngest child, son Jameson George Nantz on 1 February 2016.

While Courtney was pregnant with Jim’s son, Jameson, she wanted Jim to call the Super Bowl 50 even if he missed his son’s birth. Fortunately, Jim did not have to worry about that.

Jim Nantz and Courtney Richards’ son was born nine weeks earlier than the due date. So, Jim did not miss his birth. And he also called the game between the Carolina Panthers and Denver Broncos as per his wife’s instruction.

As mentioned earlier, Jim Nantz married has been twice in his lifetime. Before Courtney Richards, Jim was in a marital relationship with Ann-Lorraine Nantz from 1986 to 2009. During the togetherness of Ann and Jim, Ann gave birth to Jim’s first child, a daughter named Caroline Nantz. She is the oldest daughter of Jim Nantz.

Jameson Nantz’s half-sister, Caroline, was born in 1994. She studied in Staples High school. Later, Caroline graduated from the University of South Carolina. Currently, she is a production assistant at CBS Studio Center. Before working in CBS, she worked at CBS News, NBC, and Late Night with Seth Meyers as an intern.

Jameson and his half-sister Caroline has a great bonding. Caroline often visits their Pebble beach home to meet Jameson during her holidays. They also go for a vacation in various destinations together with their parents and other siblings.

Life Away From Paparazzi

Furthermore, Jameson’s mom and dad do not have social media accounts registered in their name. And Jameson is also too young to be in Social Networking Handles. So, it isn’t effortless to find the photos of Jim Nantz’s son, Jameson.

As for now, Jim Nantz and Courtney Richard’s son, Jameson, is enjoying his childhood away from the public eye in Pebble Beach Gold Course full-time.