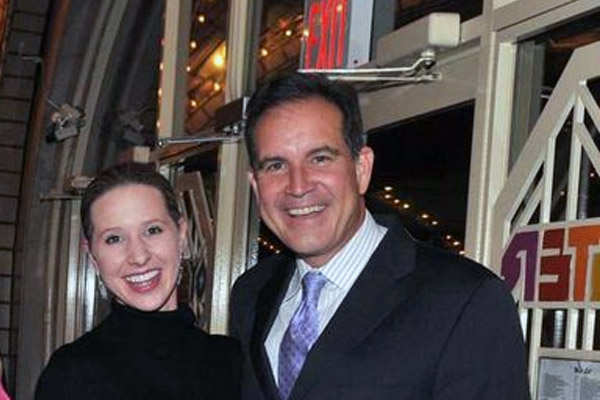 Jim Nantz, born James William Nantz III, Is an American sports analyst. Nantz is famous for his works on the NFL’s telecasts, NCAA Division I men’s basketball, and the NBA since the 1980s. Also, he worked as an anchor on CBS’ coverage of the Masters’ Tournament. Moreover, Nantz is an author of the book Always By My Side- A Father’s Grace and a Sports Journey Unlike Any Other (2008).

Talking about the personal life of Jim Nantz, he has got married twice in his lifetime. After separating with his first wife, Ann-Lorraine ‘Lorrie’ Carlsen Nantz, he is currently married to Courtney Richards. Here, know everything that you need to learn about Jim Nantz’s wife, Courtney Richards.

Jim Nantz’s Wife Married To Him Since 2012

Courtney Richards began dating the CBS sports broadcaster Jim Nantz before his divorce with his former wife was finalized. When Richards met Nantz, she worked as the vice president at IMG after serving in the same company’s sports marketing for some years.

According to the New York Post, Jim Nantz proposed his long-time inamorata, Courtney, with an engagement ring on 14 September 2010. It happened while Nantz was on vacation in Maine with George H.W. Bush, Barbara Bush, and Jeb Bush.

The lovebirds took their wedding vows twenty-one months later on 9 June 2012. Richards and Nantz tied their marital knot at the seventh hole at Pebble Beach, California.

As The New York Daily notes, some of the guests who attended their marriage ceremony were Patriots quarterback Tom Brady and Patriots owner Robert Kraft. Phil Simms, Jim Nantz’s partner in the booth during the NFL season, was also there.

Richards Wants Her Husband To Focus On His Job

Courtney and Jim added the newest member in their family, Jameson George Nantz, on 1 February 2016. Six days after the birth of Junior Jim, his father called Super Bowl 50 between the Carolina Panthers and Denver Broncos.

According to the New York Post, Richards wanted her partner, Nantz, to call the game, even if he missed his son’s birth. Thankfully, the sports commentator, Jim, did not have to worry about that. His son, Jameson, definitely has a sense of occasion and respect for timing, and his father’s needs to be well-timed.

Courtney and Jim Nantz’s son together was born nine days before his due date. So, Nantz was available there with Courtney at the time of their child’s arrival.

In 2012, Courtney Richards’ husband, Jim Nantz, revealed to the Charlotte Observer that he and his spouse live on the Pebble Beach Gold Course full-time. He told the magazine that he moved to the Pebble Beach the very night he married Richards.

When asked Nantz why he chose the seventh hole at Pebble Beach as his wedding destination, he said that the place is a spiritual setting for him. Moreover, he always feels the presence of his dad there. Nantz has written more about why Pebble Beach is still his favorite in his book ‘Always By My Side.’

Currently, the happily married couple, Courtney and her husband, reside in Pebble Beach full time with their two adorable kids, Finley and Jameson. Richards takes care of the children and household while Jim goes for his work; as Richards is very concerned about her other half’s profession.