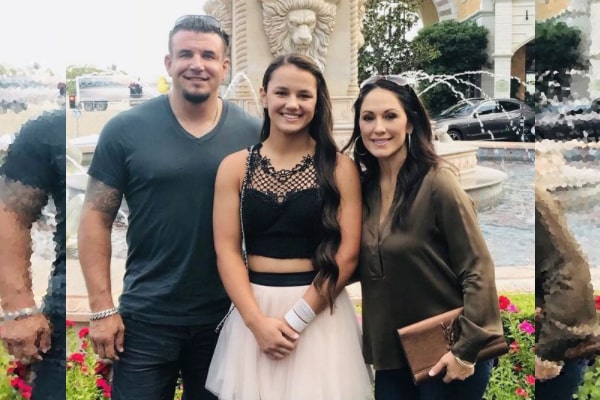 Two-time UFC Heavyweight Champion, Frank Mir, has made a remarkable name in the UFC world. Mir is a successful fighter and is in a blissful marital life with his wife, Jennifer Mir, and welcomed three kids with her, Isabella Mir, Cage Mir, and Ronin Mir and adopted Jennifer’s son, Marco Mir.

Frank Mir rejoiced his time in UFC as the youngest champ and continues his uninterrupted tenure. However, Frank cannot help gush about his daughter, Isabella, aka Bella Mir, as she’s been pursuing a robust MMA career and made a triumphant start in 2020.

Only Daughter Of The Frank Mir

Aforementioned, former UFC Champion Frank Mir is a doting and proud father of three biological children, Isabella Mir being the eldest among them. The Mir couple welcomed their first kid, Isabella, in 2003. Unfortunately, there aren’t many details about Isabella’s childhood, but she has always been the family’s sweetheart as she is the only daughter of the former UFC star.

Moreover, Frank Mir’s daughter, Isabella, grew up with her younger siblings, Cage Mir and Ronnin Mir. She also has an adopted older brother, Marco Mir, son from Jennifer’s previous marriage. Furthermore, Jennifer shared a couple of photos of her children back in 2010 as they accompanied their father and enjoyed Disneyland.

Besides that, Isabella maintains a good sibling bond with her brothers. Since the Mir family are gym enthusiasts, Isabella is joined by her brother, Cage, and her parents whenever she trains.

Growing up, Isabella must have been heavily influenced by her father. Thus, she spent half of her life in the gym with her father and wrestled in high school. In fact, Frank Mir’s oldest child, Bella, was a stand-out high school wrestler at Bishop Gorman High School and a three-time state champion. She also played football in her freshman year.

Well, the overachieving daughter of Frank made her debut fight in October 2020.

Followed Her Father’s Footsteps Into The Martial Arts World

As mentioned earlier, Frank Mir’s daughter, Isabella Mir, aka Bella, is a three-time state champion and followed her father’s footsteps in MMA.

The father-daughter duo shared a lot of time in the gym training. This ultimately paid off in October 2020 when Isabella signed with Ikon Fighting Federation at age 17. While talking to ESPN, Bella Mir’s manager, Malki Kawa, revealed her pro-MMA debut fight would be in San Carlos, Mexico, against Danielle Wynn in a 135-pound bout.

Nicknamed Lady, Bella earned a unanimous victory over Danielle and last fought against Cespedes on December 11 in Mexico. Moreover, her latest opponent, Cespedes, did not compete from October 2019 until December and lost against Bella.

Bella Mir’s father, Frank, never missed celebrating his daughter’s victories online and in real life. Furthermore, papa Mir is very proud of being cornered by his daughter during her emerging year. Moreover, Isabella’s winning spirit is higher, and she is probably destined to become the youngest champion in UFC history.

Besides working hard in the arena/cage, Frank Mir’s only daughter, Isabella Mir, also acts as the brand ambassador for her father’s brand, Mir American Shaman. According to the site, she uses CBD products to recover after a fight and recommend them to her fans.

Bella has been training her entire life with her father and seems to have a strong mentality. Hence, the sky is the limit for Frank Mir’s girl, and she’ll surely succeed her father in her on-going MMA career.

The name Isabella has a Hebrew origin which means God’s promise.