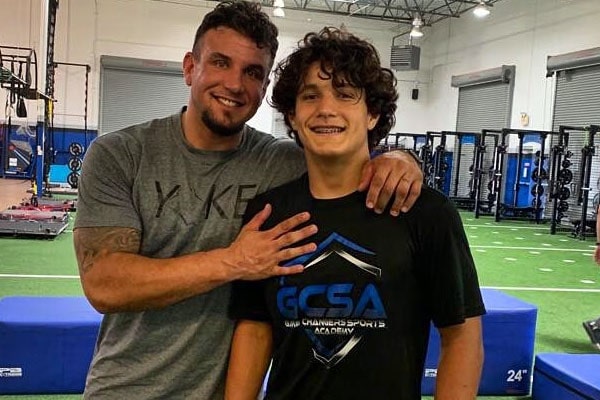 The son of a Cuban-born wrestler of Moroccan and Russian heritage, Francisco Santos Mir, Frank Mir grew up to be a celebrated wrestler. Currently, Frank Mir is one of the most celebrated American mixed martial artists and professional wrestlers. Lately, he competed in the Heavyweight division for Bellator MMA. Besides, Mir also competed in the Ultimate Fighting Championship (UFC) for 16 years and won UFC heavyweight Champion twice. Besides, Frank Mir is also popular as a color commentator, currently working for Absolute Championship Berkut.

Frank Mir has worn many hats in his life, but perhaps the one he is most proud of is being a father. Atheist and Libertarian Frank Mir has three kids, Isabella Mir, Cage Mir, and Ronin Mir, with his long-time wife, Jennifer Mir. Many fans speculate that Frank Mir’s son, Cage Mir, might also follow his dad’s footsteps in wrestling. So, here get to know if Cage really inherits his father’s fighting skills along with some more facts on him.

Few only might know that before gaining fame as a wrestler and mixed martial artist, Frank Mir played football for a while during his high school. With the constant motivation of his parents, Frank joined the wrestling team of the Bonanza High School. He played fullback and defensive end on his school’s American Football team, along with giving continuity to wrestling. While Frank Mir was on the football team, his team had reached the Southern Zone semifinals in 1997. Though he left playing football, his son, Cage, inherited his skills and currently making his parents proud, winning various awards and titles.

I can’t truly express how proud I am of my son. Good luck at nationals and just be you 🤜🏼🤛🏼#VegasStrongFootball #Championships #MirKids pic.twitter.com/aIxqLHXqOx

Frank Mir’s son, Cage Mir, also known by the name Kage Mir, seems to have a keen interest in sports, just like his father. At the moment, he plays football for the Vegas Strong Football team. Most recently, Cage’s Vegas Strong team won the U14 National championship. Frank, the proud dad, had announced the victory of his son, Cage, and his team via his Instagram page with a photo of Cage wearing the championship ring.

Furthermore, Frank Mir’s son, Cage Mir, also seems to be equally interested in wrestling as well. Once in 2018, Frank had shared a video of Cage bench pressing his body weight when he was just twelve years old. It shows that Cage shows an inclination towards wrestling as well. Moreover, the grown-up son of Frank, Cage, frequently posts videos of him practicing in the gym on his Instagram page.  It seems like soon we might see another Mir shining out in the wrestling ring. But for now, we just need to have some patience and wait to see which field Cage will choose as his career.

Cage Mir is the middle kid of wrestler Frank Mir with his beloved wife, Jennifer Mir. His parents, Frank and Jennifer Mir, took their wedding vows in 2004 and welcomed his big sister, Isabella Mir, soon after their marriage, followed by him some years later. Cage has a younger brother named Ronin Maximus Mir, who arrived on 9 June 2009. Besides, he has a half-brother from his mother’s previous relationship.

Frank Mir’s son, Cage Mir, shares a great bonding with his siblings. As mentioned by Frank in various interviews, Cage often practices in the boxing ring with his big sister, Bella, who is also a professional MMA. He also enjoys spending his spare time with his small brother, Ronin, who also shows interest in sports like his dad and elder siblings.

Frank Mir’s eldest son, Cage Mir, is active in the social networking handles and popular among his friends and family members with the name Kage Mir. Going through his social media posts, it seems like he is in a romantic relationship with Isabella Lopez.

Cage Mir often shares his picture with his girlfriend, Isabella, on his social media pages. Seeing the pictures posted by Cage, it seems like he is so deeply in love with his girl. Like many other lovebirds, Cage and Isabella also love hanging out and celebrating special occasions like Christmas, Halloween, and many more together. We hope their romance and love for one another remain strong till eternity.