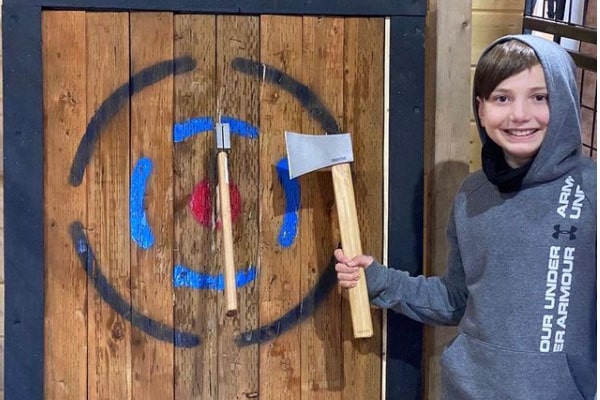 Frank Mir is a well-known face in the field of wrestling and mixed martial arts. He is an American professional wrestler and MMA who recently competed in the Heavyweight division for Bellator MMA. Before that, Mir also competed in the Ultimate Fighting Championship (UFC) for almost 16 years and won the UFC heavyweight title two times. Moreover, Frank is the one who holds the record for the most submission victories and the most finishes in UFC Heavyweight history. Currently, Frank Mir is a color commentator for Absolute Championship Berkut.

Besides being a successful wrestler, Frank Mir is a proud dad to three talented kids with his long-time wife, Jennifer Mir. The internet is filled with information about Frank’s professional achievements. However, only a few details are available for the public about his personal life. So here get to know some facts about Frank Mir’s son, Ronin Maximus Mir.

Ronin Maximus Mir is the youngest child of the UFC professional wrestler, Frank Mir, with his beloved wife, Jennifer Mir. His parents took their wedding vows in 2004 in the presence of some of their close family members and friends. They welcomed Ronin five years later, on 9 June 2009. At the time, he was preparing for his UFC Heavyweight Championship match against another wrestler, Brock Lesnar.

Aforementioned, Ronin Mir has two elder siblings, brother Cage Mir and sister Isabella Mir. His eldest sister, Bella, is also a professional mixed martial artist and has won numerous championships to date. Similarly, Ronin’s brother, Cage, is also an athlete who currently plays football and is also preparing to be a wrestler like their dad.

Frank Mir’s son, Ronin Mir, shares a close bonding with both of his siblings. The Mir siblings enjoy spending their spare time together learning martial arts techniques from their dad, playing with Ronin, and traveling to various places.

Many might be aware of the fact that Frank Mir inherited martial arts skills from his dad, Francisco Santos Mir. Frank’s dad was a Cuban-born wrestler of Moroccan & Russian heritage. So, since childhood, Frank also got inclined towards martial arts and became one of the most celebrated wrestlers. Like him, his son, Ronin, also inherited his grandpa and his dad’s athletic skills. As a result, he actively participates in his school’s sports activities.

The eleven-year-old son of Frank Mir, Ronin, has been involved in sports since his toddler years. To date, he and his sports team have won numerous medals and awards playing several games. Moreover, like his brother and sister, Ronin also seems to have an interest in martial arts as well. He is often spotted working out with his wrestler dad at his gym and trying to copy him through his parent’s social media pages. His mom, Jennifer, and dad, Frank, frequently posts pictures of him playing different sports and sometimes accompanying his siblings and father in the gym.

Seeing Frank Mir’s son, Ronin’s keen interest in his dad’s profession, it seems like his dream is also to be a professional fighter when he grows up. Though Frank wants all of his kids to be doctors, engineers, or do any other jobs where they wear ties, it looks like Ronin and his siblings’ dream is to be in a wrestling ring like him. Nevertheless, for now, Ronin is a young boy, and there are still many more years to see which career path he chooses.

His Parents Are Raising Him Well

Ronin Mir’s parents, Frank Mir and Jennifer Mir are undoubtedly busy. As we all know that Ronin’s dad, Frank, is a professional wrestler, and most of the time, he has to practice for his match. Moreover, his mom, Jennifer, is a beauty expert and owns a brows store in Las Vegas, Nevada. Despite being busy, both Frank and Jennifer make sure to separate enough time for Ronin and their other kids.

Happy Holidays from The Mirs! pic.twitter.com/hMeovTTdJ0

Frank often takes Ronin and his other children with him wherever he goes, either it is while going for a match or while practicing in the gym. He always looks more like a dad taking his little ones to Disneyland. Many might think that Frank might get distracted by his family, but the truth is that it is never like that. For Frank Mir, his family is his inspiration, and having them by his side is a must. Actually, he is more comfortable when his kids are around him.

Furthermore, while talking to the Las Vegas Sun, Frank Mir’s wife told being a father is quite disadvantageous for Frank as he has to train. But since Frank came from a family with a martial arts background, he can balance both lifestyles. Though Frank is one of the fiercest MMAs in the world, he is just a father and a husband when he is back home. He always makes sure to make Ronin and his other kids feel that how much he adores them. Moreover, being the youngest child of the family, Ronin is also getting extra love and care from his elder siblings.