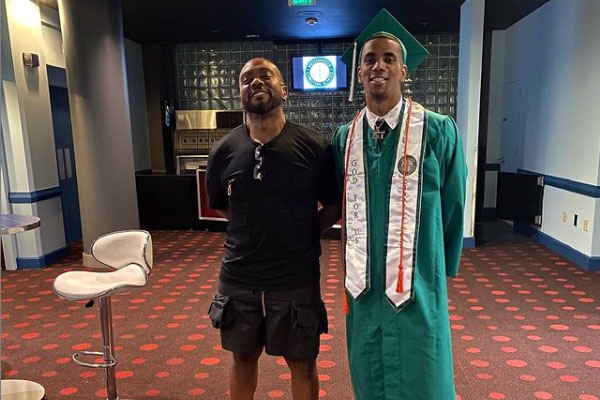 Frankie Idlett Mosley is the youngest son of the legendary American musician, record producer, rapper Timbaland and his ex-wife, Monique Idlett. His dad, Timbaland, is widely famous for his exceptional production work and peculiar ‘stuttering’ rhythmic style. Moreover, he is also the founder and owner of the imprint record label, Mosley Music Group. Similarly, Frankie’s mom, Monique, is also a famous entertainment pioneer. She is the CEO of Reign Venture Capital for more than two decades.

Almost every person involved in the music industry and those who are keen music fans know a lot about rapper Timbaland. But very little is available to the public about his personal life. So, here, get to be familiar with some unknown details on Timbaland’s son, Frankie Idlett Mosley.

One Of Three Kids Of Timbaland With Monique Idlett

Frankie Mosley is one of three kids of Timbaland with his former wife, Monique Idlett. However, he is not the biological child of the music artist. Frankie is the child of Idlett from her union with another man before meeting Timbaland. According to online sources, Timbaland accepted him and raised him like his own after marrying Monique Idlett in 2008.

The eighteen-year-old Frankie Mosley has a brother named Demetrius Idlett Mosley, who follows their dad’s footsteps in the music industry. Similarly, he has a half-sister. Reign Mosley, whom Monique and Timbaland welcomed some years after their relationship started. Monique Idlett’s son Frankie is very close with both of his siblings and often appears in his parents’ social media accounts together.

Furthermore, Timbaland’s son, Frankie Mosley, is a Westminister Christian Schools graduate. He graduated from WCS recently in May 2021 with a degree in engineering. Though his mom and dad, Monique and Timbaland, are no more living together, both of them had attended his graduation ceremony together.

Frankie’s Mom Filed For Divorce From His Dad Twice

Frankie Mosley’s mother, Monique Idlett, filed for divorce from Timbaland twice. First, she filed for divorce in October 2013, citing irreconcilable differences. Idlett even asked for some amount as alimony from Timbaland, which covered spousal and child support, education cost, and insurance for Frankie and his other siblings.

However, the now-estranged parents of Frankie got back together but for only a short amount of time. In July 2015, Monique again filed for legal separation, which got finalized only in March 2017. Since then, Frankie Mosley’s mom, Monique, seems to live a single life while his dad, Timberland, is dating Michelle Dennis.

After the official separation of Monique and Timbaland, they agreed to co-parent their son, Frankie Mosley, and their other two kids. So, despite the divorce, the two are still on good terms for raising their youngsters together.

Being the son of the music legend Timbaland does not mean Frankie’s career is strictly meant to take a musical path. Growing up, he chose an entirely different career path than his father. Since his early childhood days, Timbaland’s son, Frankie, began showing an inclination towards sports, especially basketball. Coming to the present, he has already sharpened his skills in the basketball game.

Though Frankie has not played basketball professionally, it seems like soon we can see him playing for some reputed basketball team of the United States. He started playing basketball in his childhood days and has won numerous titles and awards to date, playing for his school and college.

Well, in the past, Frankie and his team members from WCS’ Warriors defeated the basketball players of Columbus High School with a final score of 80-75, where he scored 17pts. He and his parents often share pictures and videos of him playing basketball against several other basketball teams on their social media handles. Seeing his dedication and skills as a basketball player, it looks like shortly he will get offers from some prestigious basketball teams around the globe.

So, for now, Timbaland’s son, Frankie Mosley, is working towards being a well-established basketball player in the near future. And, though he has not shown it in public to date, we hope he also inherits some musical ability from his dad, like his brother. We wish Monique Idlett’s son Frankie all the best for his future and hope to see him succeed in his chosen career path.

The boy’s name Frankie is of Latin origin. Its meaning is Frenchman or free man.