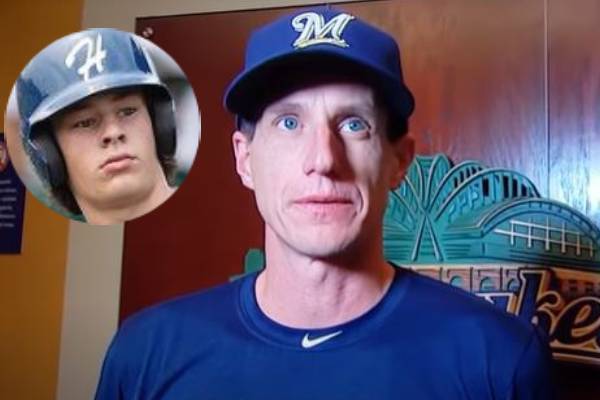 Baseball has become one of the most-watched and loved sports in the world. With more than millions of followers around the world, it has also become a good source of income and fame for several players, entrepreneurs, and businesspeople. Just like that, Craig Counsell is also one of the notable names in the baseball world.

Because of his enormous fame and popularity, Craig’s personal life has always been a topic of interest for several baseball fans. Craig, the loving husband and the doting father of four, must be living a great life with his family. In this article, let’s know more about Craig Counsell’s son, Jack Counsell, and see how he is growing up.

Is The Second Son Of His Parents

Craig John Counsell, aka Craig Counsell, shares a happy marriage with Michelle Counsell. The duo tied the knots over the winter before 2001 spring training. Since then, the love birds have been living a happy and joyous life together. In more than 20 years of being married, the duo has welcomed four children, two sons, and two daughters.

Craig Counsell’s son, Jack Counsell, is the second son of him and his wife, Michelle.

Well, Jack has two younger sisters and an elder brother. He resides with his parents, brother, Brady Counsell, and two sisters, Finley Counsell and Rowan Counsell, in Whitefish Bay, Wisconsin.

Seeing him thrive in baseball, Craig Counsell’s kid, Jack Counsell, has also followed in his dad’s footsteps. Baseball has become a number one sport for him to play. He is a sophomore student at the Whitefish Bay High School. Furthermore, he is the player of 2023 hitters baseball.

Not only that, Craig’s baby boy, Jack, has played in several other tournaments and championships along with his brother, Brady. In May 2021, he played along with his brother for the varsity team at Whitefish Bay. Jack’s dad, Craig, who always used to be on the road or had a game conflicting with his games, got to watch his full game in person for the first time.

Jack and his brother, Brady, play for one of the top teams, the Blue Dukes. According to PressReader, he has adopted his elder brother’s work ethic. In addition, being around his dad, who manages a baseball team, has helped the young man learn countless lessons about baseball. Growing up in a baseball family, Jack must have developed an interest in baseball.

Who knows, in the coming days, we can see him as one of the successful baseball players in the sports world.

As mentioned earlier, Craig Counsell’s son, Jack Counsell, plays high school baseball at Whitefish Bay High School. He has yet to finish his studies, so it might be a while before we see him choosing a profession. Will he go professional after completing his high school studies? Even if he does, will he become as successful as his dad?

Well, only time will tell. But, we do hope to see him playing in the MLB in the future. Therefore, we wish Craig Counsell’s son, Jack Counsell, good luck in the coming days.

The name Jack carries the meaning God Is Gracious, and it has an English origin.