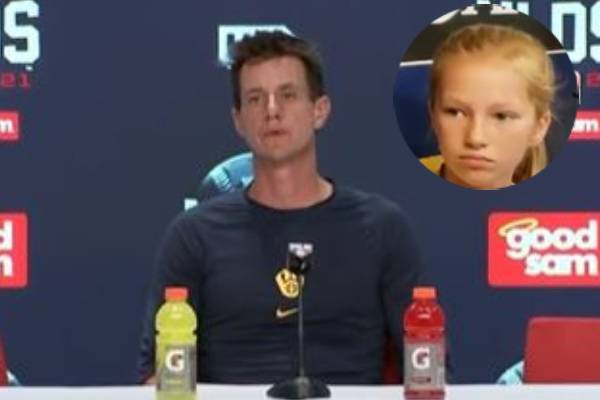 Craign Counsell's daughter Rowan Counsell is the youngest one in the family. Image Source: Social Media.

Craig Counsell is a reputed name in the baseball world. The current manager of Milwaukee Brewers, Craig, has also played as an infielder for five different teams. Since May 2015, he has been serving as the manager of the Brewers and has garnered significant fame and fortune to his name.

Because of his worldwide recognition, Craig’s personal life has been a topic of interest for several baseball fans. He is one of those sports celebrities who keep their personal lives away from the media and the limelight. So, it is natural if fans want to know more about his kids and marital life.

So, in this article, let’s know more about Craig Counsell’s daughter, Rowan Counsell, and how she is growing up.

Youngest One In The Family

The handsome manager of Milwaukee Brewers has been married to his high school girlfriend, Michelle Counsell, since the winter of 2000, and it has already been over two decades of their marital life. In all these years of blissful marriage and togetherness, the adorable couple gave birth to four beautiful kids.

Rowan Counsell is Craig Counsell’s youngest child with Michelle Counsell. Before her, they welcomed two boys and a daughter. As the youngest sibling of Brady Counsell, Jack Counsell, and Finley Counsell, Rowan must be pampered very well.

The three elder children love their baby sister, and all four are having a great time growing up together in their dad’s childhood hometown, Whitefish Bay, Wisconsin.

Is Growing Up In A Baseball Family

Craig Counsell’s daughter, Rowan Counsell, is growing up in a baseball family. Her dad, Craig Counsell, carries a big name in the baseball world. He has gained fame for his unique batting stance and notable performances with different teams. In 2001, he was named the NLCS Most Valuable Player.

Not only that, Rowan Counsell’s two brothers, Brady and Jack, have followed in their grandfather and father’s footsteps. They also play baseball, and both of them started their playing career from their high school, Whitefish Bay High School. Furthermore, her eldest brother, Brady, is committed to the University of Minnesota.

Excited to announce I will be committing to the University of Minnesota. I’d like to thank my family, teammates and coaches for helping me along the way.#gophernation pic.twitter.com/0ITNtlJjIM

And, her other brother, Jack, is a sophomore at the Whitefish Bay High School. He plays as the player of 2023 hitters baseball. Who knows, growing amidst the four baseball players in the family, Craig Counsell’s daughter, Rowan, might also be interested in playing baseball.

Her Sister Is A Basketball Player

Unlike their brothers, dad, and granddad, Rowan Counsell’s sister, Finley seems to have a different interest. She loves playing basketball. During her seventh grade, Finley was on the team, and while her dad served as a coach.

However, it is unknown if she still plays. But, who knows, Craig Counsell’s daughter, Rowan, might also develop an interest in basketball like her sister.

Craig Counsell’s Daughter Once Interviewed Him

In September 2019, Craig Counsell’s daughter, Rowan Counsell, interviewed him. She asked him why he did not smile more. To which Craig replied that he would work on it and will smile more often. Other reporters also asked him if he really enjoyed his job. He replied that he enjoys his job. He added that his job is pressure but is fun at the same time.

Rowan listened carefully to her dad while he spoke with the reporters. The youngest Counsell child must be proud of her dad’s achievements.

Craig Counsell’s daughter is still in her school, and it is not sure what she will pursue in the coming days. Nevertheless, we hope she becomes a successful person like her dad and makes a big name for herself.

The name Rowan has an English origin, and it means The Rowan Tree.