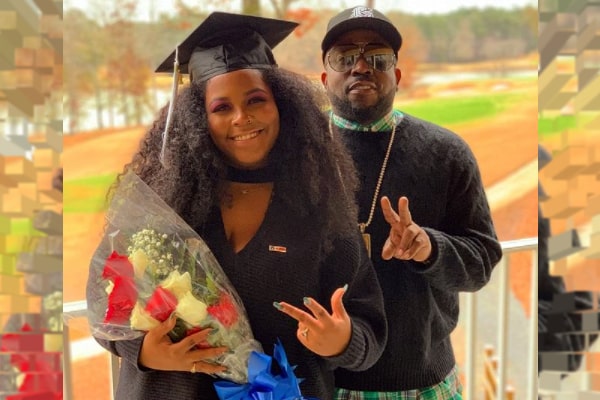 Along with Andre 3000, Big Boi became one of the most celebrated music artists in history through their two-person band, Outkast. Besides, Big Boi also released his singles that gained critical acclaim. Along with commercial success, Big Boi has also earned an equal or greater reputation.

However, one of the most outstanding achievements in Big Boi’s life is his wife and three kids. Yes, the veteran singer welcomed three kids with his soulmate, Sherlita Patton, Jordan being the oldest.

Therefore, here, we shall talk about Jordan Patton, Big Boi’s daughter, who has already graduated from college.

It is not a secret that Big Boi is married to his wife, Sherlita Patton, since 2002. Although they almost got divorced following Boi’s infidelity rumor, the pair worked things out and are enjoying a blissful marital life.

Besides, the veteran Patton couple embraced parenthood with the arrival of their first child, Jordan Patton. Although the Patton pair were very young when Jordan arrived, they both took over the parenting role as if it was all-natural. Hence, the entrepreneur mother, Sherlita, and self-made rapper Big Boi raised their daughter to be more independent and compassionate.

Furthermore, Jordan became an older sister when her parents gave birth to their second kid, Antwan André Patton II, aka Bamboo Patton, and a year later, Cross Patton. The Patton siblings cherish a strong bond with one another, and Jordan undoubtedly became an inspirational figure for her brothers.

Moreover, Jordan Patton has preferred confidentiality and keeps her Instagram and other social media handles private. Unlike her, her brothers are very active on Instagram and boast an impressive number of followers.

Graduated With Honors From University

As mentioned earlier, Big Boi’s baby girl, Jordan Patton, is a bright lady. She was a Camp Starlight counselor and high school honor kid as a teen. Hence, her father, Big Boi, gifted her a record label, Purple Ribbon Kidz, and her accomplishment was held at a Hard Rock Cafe in Atlanta in 2011. More on that later.

After high school, Jordan Patton graduated from Auburn University with a degree in psychology in 2018. According to her LinkedIn, she is yet to update her work experience, but her bio reveals that she’s a diligent worker ‘experienced with providing quality service & meaningful interactions.’

Sadly, Big Boi’s baby girl prefers to stay away from social media and prefers a private lifestyle. Nevertheless, her father never shies away from sharing his affection for his daughter via his Instagram. As a result, he wishes her daughter on her special days amongst 1.6 million followers.

While Jordan is pursuing her career in Psychology, her younger brother, Bamboo, is an aspiring architect and is studying at the New School in New York City. Likewise, Jordan Patton’s youngest brother, Cross Patton, is committed to Oregon University and looks forward to playing at NFL someday.

Despite hailing from a musical family, Big Boi encourages his kids to choose their own careers. Hence, he seems supportive of his daughter, who is aspiring to become a psychologist. Therefore, we hope to see Big Boi’s daughter, Jordan Patton, in all her grace and an empowering career in the coming days.

Father Gifted A Label On Her 16th Birthday

Father’s love is often compromised amidst his responsibilities, but Outkast’s Big Boi refused to accept the norm. He is known for gifting his kids, but Jordan received a special one when she turned 16.

As stated earlier, Big Boi gave his daughter, Jordan, his own label, Purple Ribbon Kidz, for her 16th birthday. Moreover, the father-daughter duo launched her label at Hard Rock Cafe in Atlanta in 2011.

Jordan signed then 13-year-old YouTuber-cum-singer Gabbie Rae and continues to sing & make other superstars. According to Rap-Up, Jordan Patton’s father, Big Boi, praised her ear for music and indirectly admitted that she is her replica.

The name Jordan has both Greek and Hebrew origins that mean to flow down or descend.